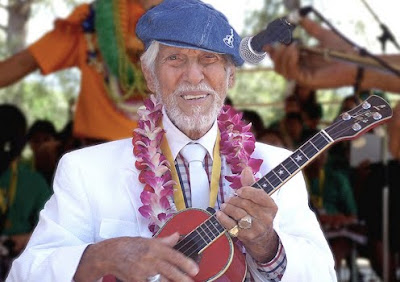 This obituary from the New York Times by Douglas Martin about Bill Tapia was just too irresistible not to share!

In 2001 Bill Tapia took one of his guitars to a Southern California music shop to get it fixed. A woman was buying a ukulele, and Mr. Tapia asked to see it. He began playing it, masterfully, with a distinctive jazz inflection.

“Hey, who are you?” the store’s owner asked.

If Mr. Tapia could have seen the future, he might have answered, “Duke of Uke,” the title of an album he recorded in 2005 at the age of 97. But at the time, he knew only that he was sad that his daughter and wife had recently died in quick succession, and that playing the ukulele felt good.

Mr. Tapia, who died on Dec. 2 at the age of 103, first played the instrument as an 8-year-old street musician, then went on to become one of Hawaii’s premier young ukulele players in the 1920s and ’30s. But after World War II he switched to the guitar to get jobs playing jazz, his favorite kind of music, gave away his ukuleles and for a half-century had almost nothing to do with the instrument that had defined his youth and middle age.

Then something astonishing happened: Mr. Tapia was “discovered” as a ukulele virtuoso at a time when the instrument was having a resurgence of popularity. He became a ukulele star, twice making the Top 10 on the jazz charts, wowing concertgoers by playing the ukulele behind his head à la Jimi Hendrix, and making three albums — one of which honored his 100th birthday. He was elected to the Ukulele Hall of Fame.

“Bill Tapia has been involved with the ukulele, jazz and Hawaiian music perhaps longer than any other living person,” the Hall of Fame said when it inducted him.

William Tapia was born in Honolulu on New Year’s Day 1908. He fell in love with Hawaiian music listening to sugarcane workers play. He bought his first ukulele at 7 for 75 cents from one of the first men to make them commercially. His father abandoned the family the next year, and young Bill dropped out of school to collect tips as a street musician.

At 10 he came up with his own version of “Stars and Stripes Forever,” which he played for troops headed for duty in the last months of World War I. At 12 he played vaudeville. At 16 he worked on luxury liners. At 19 he performed at nightclubs and speakeasies in Hollywood and at parties at the home of Charlie Chaplin. At 21 he sat in with Louis Armstrong’s band at a Los Angeles nightclub. By this time he was playing the banjo and guitar, in addition to the ukulele, and was moving between Hawaii and the mainland.

When the Royal Hawaiian Hotel staged its grand opening in 1927, Mr. Tapia played ukulele in the orchestra. He was the only one of the original musicians to return for the hotel’s 75th anniversary — and its 80th. The second two times were better, he said: he got fed.

In 1933, the Royal Hawaiian hired him to drive one of its touring cars — a yellow-and-blue seven-passenger Packard — to ferry the wealthy and famous to scenic spots. He played the ukulele for his passengers and threw in a lesson for anyone interested. His pupils included Jimmy Durante, Shirley Temple and the stars of the Our Gang comedies.

He even claimed to have taught a lick or two to Arthur Godfrey, whose ukulele playing on television sparked the instrument’s popularity in the 1950s.

During World War II, Mr. Tapia organized entertainment for serviceman in Honolulu. After the war, he moved to the San Francisco area and devoted himself to the guitar, and to jazz. The big bands and combos with which he played had no use for ukuleles.

More than 55 years later, Alyssa Archambault was researching the background of her great-great-grandfather, a steel guitar player in Hawaii, and approached Mr. Tapia. She had been a disc jockey and promoter, and was captivated by Mr. Tapia’s music and his story. She got him in touch with professional ukulele players. They thought he had died years ago, but were awed at what they heard.

He released his first album, “Tropical Swing,” in 2004, when he was 96, and “Duke of Uke” the next year, both on the small Moon Room label. A live recording of his 100th-birthday concert at the historic Warner Grand Theater in San Pedro, Calif., was released this June.

He played concerts regularly, delighting audiences with songs like “Little Grass Shack.” The most recent was on Feb. 11 — not counting his regular gig at a local senior center, the last of which was only several weeks ago.

Mr. Tapia had a line that never failed to impress audiences: “Here’s a song I performed during World War I.”