"WALKING ON WATER WASN'T
BUILT IN A DAY" ~ 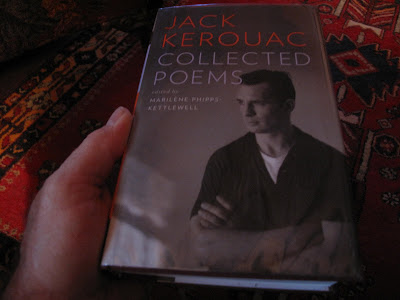 Jack Kerouac was like a man observing his river, sitting in the rain, letting it soak through his clothes, his skin, his being, his self; a man weighed down, feeling the cold, his tears as opaque as his heart. He was a Catholic man, "I'm a Catholic all along. I was really kidding Gary Snyder. Boy, they're so gullible;" he was a man imbued with service and sacrifice; he was a lover of God invested in the purification of the soul to be made ready for the resurrection of the dead; yet he was a creature confused by the conflicting pulls between loving and dying, willful individualism and martyrdom.


Still, he was a Catholic poet — his cross was not a plain cross, not a Protestant cross, stripped of the body of the sacrificed man-God. His cross bore Christ on it, and Christ was his own heart that bled like an iron rose, a Rose-En-Fer. "Wealth was neither a power / nor a consolation; he could only exist through love, through / religion, and through his faith in the future. Love made him / understand eternity. His heart and the gospels marked out / two worlds awaiting him. Night and day he was plunged in / the depths of infinite thoughts, which for him perhaps merged / into one."

A long way from

In the rain forest