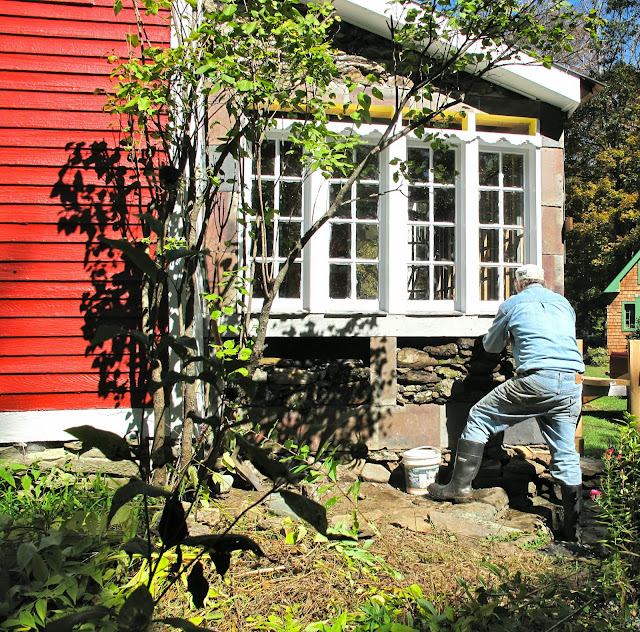 Rounding the corner on the stonework ~ all used & found materials: Guilford slate and stone. The stone all pulled out of a stonewall I built 25 years ago and expendable if you got a look at all the stonewalls I've built over 40 years around the place. Our son Carson visited and asked where I pulled the stone. I showed him where the stonewall had once been, now we would extend a flower bed; he said, "Looks better." In the photograph above, right above my arm is a line of cement board ~ soon Mexican tiles will flourish there.


Today I cut stone for windowsills and that took six hours for six windows. Each one a special measure and special cut and fitting. I ran out of the masonry blade which wears down after awhile and 12 miles from any store I had to make-do, my middle name.

There is an old trick, probably invented by a guy just in my situation — now think about this: all my life I haven't been able to, or even thought about, how I can't just jump into a car and go get something. I never have. Never. It's my secret why-not. So my life has been one big plan of a myriad of plans: fallbacks and substitutes and extra things on hand and forever planning so I'm not stuck.

Here I was with one more stone to cut and shape into two stones for two windows. No blade. I could hammer the slate into easy submission if on a roof, but not for the exact measurement of a windowsill.

Sweetheart happened to be in town on errands and she carries a cell phone for emergencies so never has it on until there is an emergency. It doesn't matter if I have one. I don't know a cell phone from a transistor radio, have never used or even held one and don't know Sweetheart's cell phone number anyway, and she can't remember it either!

I recalled how when I was a boy an old timer took his skill saw blade (a dull one) and turned it backwards in the saw and we could now cut metal with it, and probably stone. I'd done metal plenty of times this way but hadn't had to try stone. I was always prepared.

I found an old blade and gave it a shot, wetting the stone to help the blade cut (never dry) and sure enough it cut better than the masonry blade.


If I was a boy scout (and I am) my moral of the story would be: learn to flip the blade.