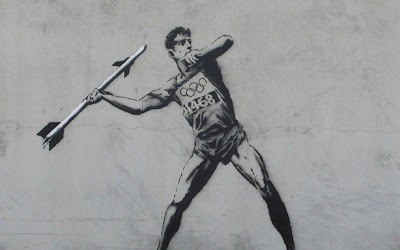 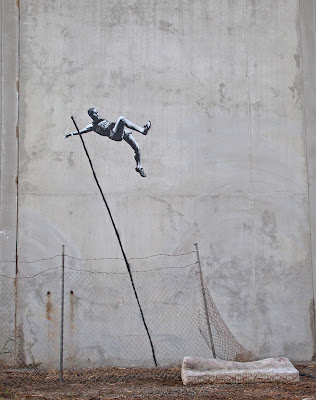 His satirical street art and subversive epigrams combine dark humour with graffiti done in a distinctive stencilling technique. Such artistic works of political and social commentary have been featured on streets, walls, and bridges of cities throughout the world.

Banksy's work was born of the Bristol underground scene which involved collaborations between artists and musicians. According to author and graphic designer Tristan Manco and the book Home Sweet Home, Banksy "was born in 1974 and raised in Bristol, England. The son of a photocopier technician, he trained as a butcher but became involved in graffiti during the great Bristol aerosol boom of the late 1980s."Observers have noted that his style is similar to Blek le Rat who began to work with stencils in 1981 in Paris and Jef Aerosol who sprayed his first street stencil in 1982 in Tours (France), and members of the anarcho-punk band Crass, which maintained a graffiti stencil campaign on the London Tube System in the late 1970s and early 1980s. However Banksy himself stated on his website
that in all actuality he based his work on that of 3D from Massive Attack, stating, "No, I copied 3D from Massive Attack. He can actually draw."

Known for his contempt for the government in labelling graffiti as vandalism, Banksy displays his art on public surfaces such as walls, even going as far as to build physical prop pieces. Banksy does not sell photos of street graffiti directly himself; however, art auctioneers have been known to attempt to sell his street art on location and leave the problem of its removal in the hands of the winning bidder. Banksy's first film, Exit Through the Gift Shop, billed as "the world's first street art disaster movie," made its debut at the 2010 Sundance Film Festival.The film was released in the UK on 5 March 2010. In January 2011, he was nominated for the Academy Award for Best Documentary for the film.


Regarding personal fame, Banksy has stated that "We don't need any more heroes; we just need someone to take out the recycling." However, in addition to his artwork, Banksy has claimed responsibility for a number of high profile art pieces, including the following:

At London Zoo, he climbed into the penguin enclosure and painted "We're bored of fish" in 7-foot-high (2.1 m) letters.

At Bristol Zoo, he left the message "I want out. This place is too cold. Keeper smells. Boring, boring, boring." in the elephant enclosure.

In March 2005, he placed subverted artworks in the Museum of Modern Art, Metropolitan Museum of Art, the Brooklyn Museum, and the American Museum of Natural History in New York.

In May 2005 Banksy's version of a primitive cave painting depicting a human figure hunting wildlife while pushing a shopping trolley was hung in gallery 49 of the British Museum, London. Upon discovery, they added it to their permanent collection.

In August 2005, Banksy painted nine images on the Israeli West Bank barrier, including an image of a ladder going up and over the wall and an image of children digging a hole through the wall.

In April 2006, Banksy created a sculpture based on a crumpled red phone box with a pickaxe in its side, apparently bleeding, and placed it in a side street in Soho, London. It was later removed by Westminster Council. BT released a press release, which said: "This is a stunning visual comment on BT's transformation from an old-fashioned telecommunications company into a modern communications services provider."

In June 2006, Banksy created an image of a naked man hanging out of a bedroom window on a wall visible from Park Street in central Bristol. The image sparked some controversy, need quotation to verify] with the Bristol City Council leaving it up to the public to decide whether it should stay or go. After an internet discussion in which 97% of the 500 people surveyed supported the stencil, the city council decided it would be left on the building. The mural was later repainted with blue paint by fellow graffiti artists.

In August/September 2006, Banksy replaced up to 500 copies of Paris Hilton's debut CD, Paris, in 48 different UK record stores with his own cover art and remixes by Danger Mouse. Music tracks were given titles such as "Why Am I Famous?", "What Have I Done?" and "What Am I For?". Several copies of the CD were purchased by the public before stores were able to remove them, some going on to be sold for as much as £750 on online auction websites such as eBay. The cover art depicted Hilton digitally altered to appear topless. Other pictures feature her with her chihuahua Tinkerbell's head replacing her own, and one of her stepping out of a luxury car, edited to include a group of homeless people, which included the caption "90% of success is just showing up."

In September 2006, Banksy dressed an inflatable doll in the manner of a Guantanamo Bay detainment camp prisoner (orange jumpsuit, black hood, and handcuffs) and then placed the figure within the Big Thunder Mountain Railroad ride at the Disneyland theme park in Anaheim, California.

He also makes stickers (the Neighbourhood Watch subvert) and was responsible for the cover art of Blur's 2003 album Think Tank.

In September 2007, Banksy covered a wall in Portobello Road with a French artist painting graffiti of Banksy's name. The piece was allegedly sold on eBay for £208,100.

In July 2012, in the run up to the London 2012 Olympic games he created several pieces to based upon this event. One included an image of an athlete throwing a missile instead of Javelin. Evidently taking a poke at the Surface to Air missile sites positioned in the Stratford area to defend the games.


~ for footnotes and more see
Wikipedia