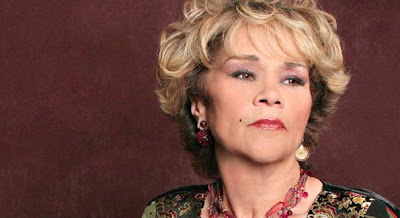 Ah, what a harsh week for R & B — to lose two master acts & lives days apart — Johnny Otis and Etta James, old friends, and that they now bunk bed the obituary file for the New York Times and The Guardian (U.K.) all we can say is let the music roll.

Everyone, including me, loves early Etta James on the Chess label, unbeatable. I'm choosing a song here from one of her last recordings, when she'd been to hell and back and was still creating gems of blues and soul and straight talk like no one else.


"Etta James was born Jamesetta Hawkins in Los Angeles on Jan. 25, 1938. Her mother, Dorothy Hawkins, was 14 at the time; her father was long gone, and Ms. James never knew for sure who he was, although she recalled her mother telling her that he was the celebrated pool player Rudolf Wanderone, better known as Minnesota Fats. She was reared by foster parents and moved to San Francisco with her mother when she was 12." 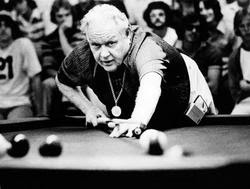 We must stop this corporate takeover of American democracy

Unless we can reverse the supreme court's dreadful Citizens United decision, US politics will become a plutocrats' plaything 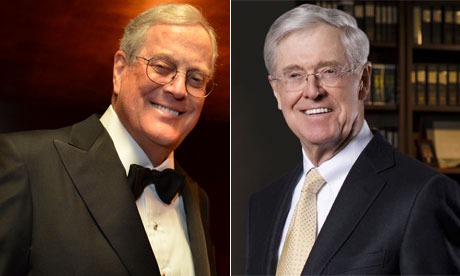 David Koch and Charles G Koch: the US supreme court's Citizens United decision has enabled the industrialists to fund conservative groups to the tune of $200m already in this electoral cycle. Photograph: Getty

The corporate barbarians are through the gate of American democracy. Not satisfied with their all-pervasive influence on our culture, economy and legislative processes, they want more. They want it all.

Two years ago, the United States supreme court betrayed our Constitution and those who fought to ensure that its protections are enjoyed equally by all persons regardless of religion, race or gender by engaging in an unabashed power-grab on behalf of corporate America. In its now infamous decision in the Citizens United case, five justices declared that corporations must be treated as if they are actual people under the Constitution when it comes to spending money to influence our elections, allowing them for the first time to draw on the corporate checkbook – in any amount and at any time – to run ads explicitly for or against specific candidates.

What's next … a corporate right to vote?

Don't laugh. Just this month, the Republican National Committee filed an amicus brief in a US appeals court contending that the natural extension of the Citizens United rationale is that the century-old ban on corporate contributions directly to candidates and political parties is similarly unconstitutional. They want corporations to be able to sponsor candidates and parties directly while claiming with a straight face this would not result in any sort of corruption. And while, this month, they take no issue with corporations being subject to the existing contribution limits, anyone paying attention knows that eliminating such caps will be corporate America's next prize in its brazen ambition for absolute control over our elections.

The US Constitution has served us very well, but when the supreme court says, for purposes of the first amendment, that corporations are people, that writing checks from the company's bank account is constitutionally-protected speech and that attempts by the federal government and states to impose reasonable restrictions on campaign ads are unconstitutional, our democracy is in grave danger.

I am a proud sponsor of a number of bills that would respond to Citizens United and begin to get a handle on the problem. But something more needs to be done – something more fundamental and indisputable, something that cannot be turned on its head by a rightwing supreme court.

That is why I have introduced a resolution in the Senate (introduced by Representative Ted Deutch in the House) calling for an amendment to the US Constitution that says simply and straightforwardly what everyone – except five members of the United States supreme court – understands: corporations are not people with constitutional rights equal to flesh-and-blood human beings. Corporations are subject to regulation by the people. Corporations may not make campaign contributions – the law of the land for the last century – or dump unlimited sums of money into our elections. And Congress and states have broad power to regulate all election spending.

I did not introduce this lightly. In fact, I have never sought to amend the Constitution before. The US Constitution is an extraordinary document that, in my view, should not be amended often. In light of the supreme court's Citizens United decision, however, I see no alternative. The ruling has radically changed the nature of our democracy. It has further tilted the balance of power toward the rich and the powerful at a time when the wealthiest people in this country have never had it so good.

At a time when corporations have more than $2tn in cash in their bank accounts, make record-breaking profits and swarm Washington with their lobbyists 24 hours a day, seven days a week, for the highest court in the land to suggest that there is just not enough corporate "speech" in our system defies the bounds of reason and sanity. The ruling already has led to plans, for example, by industrialist brothers David and Charles Koch to steer more than $200m – potentially much more – to conservative groups ahead of election day 2012. Karl Rove has similar designs.

Does anybody really believe that that is what American democracy is supposed to be about?

I believe that the Citizens United decision will go down as one of the worst in our country's history – and one that demands an amendment to our Constitution in order to restore sovereign power to the people, as our nation's founders intended.

If we do not reverse it and the culture of corporate dominance over our elections that it has exacerbated, there will be no end to the impact that corporate interests have on our campaigns and our democracy.