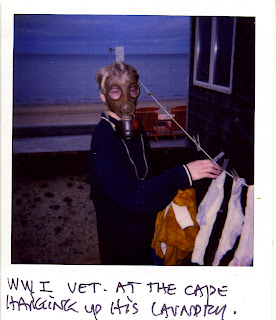 Mayor Bloomberg and Gov Cuomo, dour ones, have been fine enough about the NY region during Hurricane Sandy, but right now I'm excited about the big balls on the big fellow Gov Chris Christie. Self-involved and every inch a dynamo and just maybe the guy, a Republican! in Lowell Weicker clothing and guts, who could pull Obama up and through the election. Bipartisan at work without any strings of the usual media / politico mumbo-jumbo. Maybe two leaders who really have some idea about leading.


Hurricane Irene was the test last year for all of us, and Gov Shumlin of Vermont learned quicker than either Cuomo or Bloomberg who watch the largest city in America float there at the shore line inches from disaster, year after year, and have done very little with dire warnings for over a decade. Hell, you and I can remember as we read our Barry Commoner, Peter Berg, and Sierra Club journals in 1970 the warnings that were already forecast for the environment. Many listened and put their life shoulder into a lifestyle honoring ecology, most didn't, and few leaders lasted who tried to act on it, from Jimmy Carter on down. So mother nature sent Hurricane "Sandy". And I think next time she'll send Hurricane "Shitstorm", or Hurricane "Slander". It'll get rougher and rougher. It's already a very tragic scene in parts of NY city and on the southern Jersey shores.


Did you know Sweetheart's family founded a part of New Jersey, actually around Jersey City? It was called Paulus Hook and it's still there, around 1640. It stares across the Hudson right at the old Twin Towers location. Not that I've been there. It turns out our best pal Janine (Pommy Vega) was born in Jersey City and Sweetheart never realized it was on the very same ground her forefathers founded. They'd have fun talking about that if Janine was still with us all.


I hope your family is doing okay in NY watery. We kept the media on the past two days and just followed the storm waiting for our power to knock down any minute, but it never did. Some small miracle for a change. Lost one tree, a maple, which I cut up yesterday as easy street next to the hundreds I've cut in the past year post-Irene.


We got enough rain to make the river wilder which we forever like best. Though not a flood threat.


And here it is Halloween. When Carson was little it was such a soft and trickster day for all of us taking him up to the village for a few door knocks and sweets. It'd be easier to get Carson at age 27 to come with us tonight to rap on village doors than to find that old village of welcomers and delight. Small lamps lit by a strong door. Mainly gone. The best has slipped away. It was all once part of that infrastructure called "old ways". You couldn't buy it, own it, build it, or scream to get it. You had to believe. In ghosts.