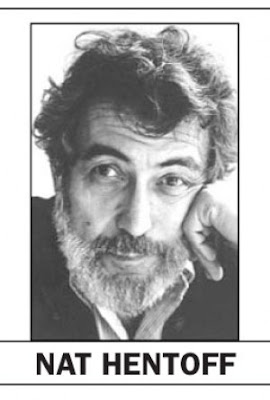 Nat Hentoff (b. 1925)
activist, historian, novelist, jazz and country music critic, and syndicated columnist for United Media and writes regularly on jazz and country music for The Wall Street Journal.
Formerly a columnist for Down Beat, The Village Voice, JazzTimes, Legal Times, The Washington Post, The Washington Times, The Progressive, Editor & Publisher and Free Inquiry. He was a staff writer for The New Yorker, and his writing has also been published in The New York Times, Jewish World Review, The Atlantic, The New Republic, Commonweal and at age 87 can be said to be unstoppable.

The Watergate legacy of disabling opponents by wiretaps and other suspensions of the Bill of Rights has since been protected by the current administration in federal court. The attorney general, Eric Holder, opposed a history professor’s attempt to secure records about the wiretap that cost Nixon his presidency.

But ceaseless advances in government privacy-invading technology have made the Nixon-era suspensions of individual constitutional liberties appear amateurish. 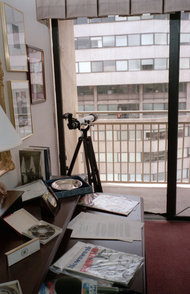 Room 723 in the Premier Hotel, across the street from the Watergate,
was the listening post for operatives spying on the Democratic National Committee.
Stephen Crowley/The New York Times.

For an example that far exceeds the once-fearsome vision of George Orwell’s “1984,” the National Security Agency — with the support of President Obama, who was elected in part for pledging the most transparent administration in American history — is erecting a data tracking center in Bluffdale, Utah, that as of September 2013 will be storing and distributing to other intelligence agencies “all forms of communications, including the contents of private emails, cellphone calls and Google searches, as well as personal data trails — parking receipts, travel itineraries, bookstore purchases.” (Including, I’m sure, e-books, to be up to date.) In view of the Obama administration’s strange definition of its transparency, I give you my source: James Bamford, a historian who, more successfully than any investigative reporter, has become familiar with the inner workings of the N.S.A.

It was Senator Frank Church of Idaho who, investigating the state of our privacy in 1975, warned that as the N.S.A. kept evolving without accountability, for Americans “there would be no place to hide.”

Meanwhile, the F.B.I.’s domestic surveillance powers allow it to open a warrantless “threat assessment” against any American or organization without going to court and without any articulable evidence of imminent or actual criminal behavior.

Turning America into a society under surveillance was never remotely conceived by the Founders, however conflicted they sometimes were. Nor does it seem likely that our resemblance to Iran in this context will be an issue of any consequence in the 2012 elections. The incumbent is, of course, immovable in his definition of national security as it frees him from fealty to the Constitution. Mitt Romney has so far not given any indication that he is in the least troubled by the National Security Agency. And most of the rest of us are concerned with our survival in this perilous economy.

Is this still America?

Nat Hentoff has been writing about civil liberties for more than 50 years. He is a senior fellow at the Cato Institute.