Zero Dark Thirty, or, as I like to call it: 'Hard-Wired American Troopers', a film directed by Kathryn Bigelow, is an exercise in ennui and finally despair. The "shocking" water boarding scenes seem more hype and are actually comparable to photographs in Time Magazine. The fact that the US government operated as torturers with torture chambers spread out around the Middle East and Europe should be of more concern. They're still there, of course, since these makeshift gulags sometimes show results. "Black Sites." Expect a restaurant chain to erupt in the United States with this headline title sometime in the redeeming future. The choreography was worthless throughout the film since every explosion was hinted at moments before it wrecked havoc — whether a bus, a restaurant in a hotel, or a car approaching. Gee, I wonder what is about to happen? The strike on bin Laden's compound is a cruel video game of shooters knocking down almost anything that moved in its laser-seeking path upward to the third floor and its "jackpot" (a very ill bin Laden). Women are shot, then shot again, children possibly were, since there were many screaming and scrambling in the darkness of the raid, but we don't get a clear look at that. Nor do we see what happened to the many innocent women and children inside the structure — while a helicopter is blown to smithereens right inside the compound grounds by our crackerjack crash landing crew, and supposedly the women and children were left behind with the dead bodies, and the massive explosion, to fend for themselves. We heard, away from any Hollywood film, the Jackpot was "buried at sea," but nothing of this is shown in the film. Our hero "Maya," played by Jessica Chastain, is transported in a military cargo plane, designed to move a small army, and she can "go anywhere you like." Good old military justice and waste. While we're left with a final scene as she is stunned and weeping in what may be described as a vacuum of worthlessness. 'Where to go?' seems to be what the director is saying. "What's to watch?" is what I'm asking. The American Trooper Hard-Wired video shooters and players are demanding upon a tribal society that they are saviors to miraclewhip up a delicious "democratic" state salad. Living-as-we-do-and-please is actually democratic already.

Labels: Zero Dark Thirty
BEING THERE ~ 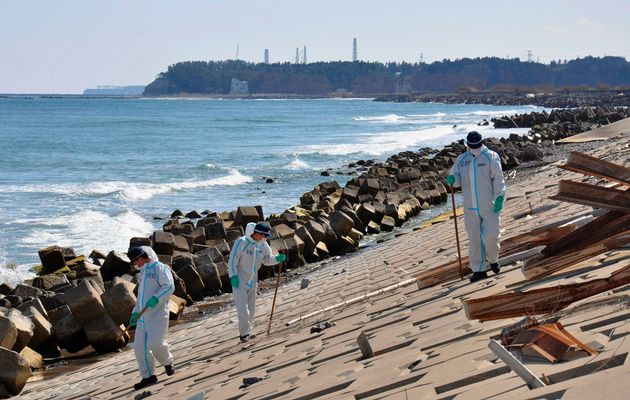 "Two years after Fukushima's triple nuclear meltdown forced tens of thousands of residents to flee, it is possible to take a virtual journey deep into the exclusion zone to one of the towns they left behind."