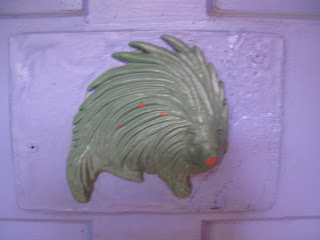 I saw porcupine as soon as I pulled the truck into the meadow. There is nothing that moves on the earth like a porcupine. Imagine carrying a body of hollow pointed quills around everywhere all through your life. Porcupine stopped his ground when he saw the red truck. I got out and slowly walked to porcupine and porcupine reared up the quills and turned its back and slowly moved into the woods edge brush, then stopped and waited. Porcupine didn't leave, and neither did I. We were five feet from one another. His chiseled full brown face and patient eyes studied all parts of what was around him. I knelt near him awhile and waited awhile with him, there was something that made us both cautious. The truck was off and way over there. The sky was blue, the foliage still green approaching fall. Two days later I would hike my morning path and nearing the meadow wonder what had happened to porcupine, and there he was in the sunshine and large leaf ginger plants munching at his breakfast. I sat down in the sun myself and watched awhile. It was the best way to be.

This was two weeks ago when I was cutting trees in the woodlot. Then one morning, hiking the woodlot path, I came across what is shown in the photograph below on the pathway, some yards away from where I last saw porcupine in the ginger plants. Just the tuft of his quilled tail and spine. Something had gotten to the old boy. Turned him over and penetrated the soft and unquilled belly. Maybe fisher cat, maybe coydog, maybe wild dog? Something. I brought what was left of my old friend home and pulled the quills, then set the bone life left up onto a tree branch, where it stays.

Porcupine climb trees and being wobbly shaped also fall out of trees. Often an open wound can be seen on their backs where they have fallen and been punctured by their own quills. I remember now porcupine had such a wound. I saw it when he jockeyed away from me on those short legs. 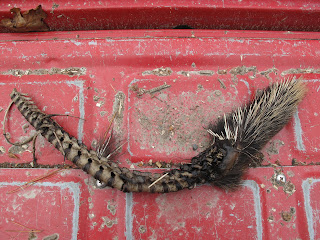