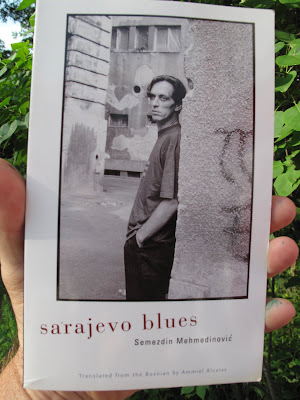 
In the evening we wait for

the sky is still in darkness

from the radiance of earthly things —

blackened by the shadow of their surfaces

and the torrid sky appears

as the moon begins to shine amidst the war —

and my son looking out the window —

on the domesticated power of the elements

I remember a reading one night. Miroslav Toholj, my friend at the time, had just come from Bor (where he had also been on literary business), and was still filled with impressions of his trip. He told us of a town in which "the crows didn't survive." Just like that, ecologically beside himself, he spoke of death as if it wasn't a natural phenomenon. This was right before he read a section of Heartmaster, a novel of his that had just come out.


At my house early the next morning, my mother was making us breakfast when my son, still drowsy, appeared at the door in his pajamas. Toholj slipped a pencil and a notebook into his hand in which there was a single sentence written: "Bor is a city in which crows can't survive." And, while my son was drawing potato head people, the owner of the notebook brushed his fingers through my son's hair.


The whole incident would be completely irrelevant if the scene hadn't repeated itself today: I'm sitting next to my son, completely engrossed in his drawing, and brushing my fingers through his hair.


After everything that's happened in the meantime, the repetition of this situation — and even my recollection of what took place six years ago — is almost comical. There was real warmth in Miroslav Toholj's gesture, a man who, not long after that visit, would fully devote himself to the expulsion of a whole people. That's what time was like, along with the things occupying it, that it made the feelings connected to any memory seem worthless.


Now, when I think of the Serbian novelist Miroslav Toholj, I am deeply aware that people aren't deserving of tragedy because existence is exalted in and of itself, and brings its own consolation. But people don't deserve consolation. Comedy is closer to the truth, since it at least shows the meaninglessness of things.


From this perspective, knowing that there is a town in which crows can't survive is truly absurd.


And look how the story ends: sitting with my son and brushing my fingers through his hair, I discover a detail that, at first, makes me smile — like when you see a kid wearing the boots of a grown up. As I slowly brush my fingers through my ten year old's hair, I find strands of grey.


War is a time of crisis for the male gender. No one can convince me otherwise: war is spurred on by the asexual, the emotionally disturbed. Love offers deliverance from the tyranny of the ego: a sexuality — combined with heavy political control — can only result in criminal perversity. I see young women change several times a day and, with make-up on, walk the empty streets of Sarajevo in which not even a single cafe is open. I know women who, in only two months, have lost so much weight so quickly, that they've also lost any sense of the erotic. And this too is a horrible result of the war: the Serbian leaders' tyranny of the ego reproduces itself in whatever space they make their presence known through war — they want to create an asexual world, no matter what the cost. I watch a famous actress hanging out with some young soldiers, defenders of the city. She's clearly having a good time and, every now and then, she delays her departure. Finally, though, they leave: the carefully chosen, refined words of the young defenders are exchanged for common jokes. Such consolation.

Semezdin Mehmedinović was born in Tuzla, Bosnia in 1960 and is the author of ~
Modrac 1984
Emigrant 1990
Sarajevo Blues 1998
Nine Alexandrias 2002
Transatlantic Mail 2009, Semezdin Mehmedinović and Miljenko Jergovic
Soviet Computer 2011
Self-portrait With a Messenger Bag 2012.