No better example than to hear him play with Bruce Springsteen "The Ghost of Tom Joad" (Morello first heard the song on Springsteen's album "Nebraska")
in stadium rock, over the heads of thousands, a political tour de force.


Springsteen is used to playing his own song, but he's never heard it like this, nor has his band, with a vituoso on guitar grinding it low & high like a bulldozer and violin. This is when Morello first put his electric guitar and singing together. And when he personally salutes Tom Joad in words, it's like the book falls open on The Grapes of Wrath.


Tom Morello is family with former President of Kenya Jomo Kenyatta, a Harvard graduate, graduate of Rage Against the Machine, and founder and axis of at least three bands and surmounting. He's one of a rare young breed who can be found playing in stadiums packed to the rafters, coffeehouses, garage setting, small studio, on the streets (Occupy). There's no stopping a lover of music & human rights. 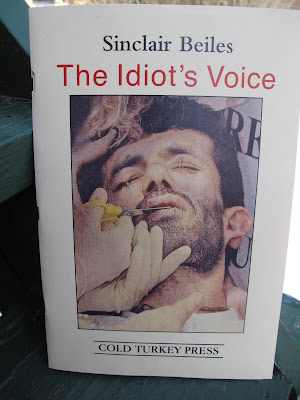 cover photograph:
The poet Abas Amini, 33 year old refugee from Iran has sewn up his eyes, ears
and mouth, and is refusing to eat in protest at the UK's treatment of asylum seekers.
The Home Office refused Abas asylum.
Mr. Amini spent more than six years behind bars, including a year of solitary
confinement, between the ages of 13 and 31. When in jail, he was beaten, sometimes on the
soles of his feet, and suspended off the ground for up to two days. Sometimes he was
subjected to mock executions.
His offences including writing of anti-government poetry, which he would sometimes
read in public, or circulate among his friends, and membership of an underground
communist group.
He was imprisoned for two years for allegedly killing a member of the Iranian
security services, but later cleared by an Iranian judge. 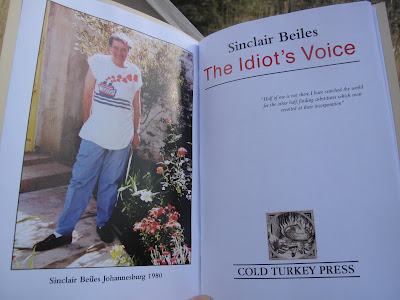 
Let me utter my last words
in a taxi cruising slowly through
the beautiful posies of neon signs.
Let someone else die in my room
on the turned mattress
so it doesn't show stains.
Let him savor the smell of it.
The smell of old lemons and let his last
moments be guillotined by badly
played guitars in other rooms.
In readiness I have a shirt with the black
ring scrubbed off the collar and a suit
which was shiny before I sandpapered it.
And now I must find my last words.

Oscar Wilde looked at the wallpaper
and said; "I knew I had to go first."
Goethe screamed, "Let there be light!"
Chekhov said, "How stupid it is for me to die."

What can I say to the taxi driver which is
memorable enough. I cannot think.
I am too overcome by the outrages
perpetrated against me.
Perhaps I should get the taxi driver to cruise
even more slowly so I can pick up
a whore and die in her room
with a beautiful zizzard of neon flashing
through the window.
Let her invent my last words
with all her experience. 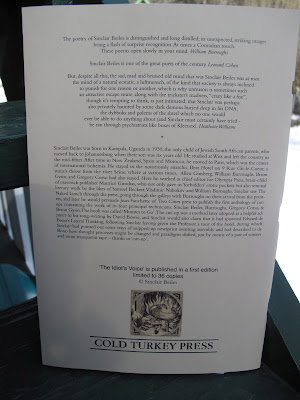 
"Sinclair Beiles was born in Kampala Uganda in 1930, the only child of Jewish South African parents, who moved back to Johannesburg when their son was six years old. He studied at Wits and left the country in the mid-fifties. After time in New Zealand, Spain and Morocco, he moved to Paris, which was the center of international bohemia. He stayed in the notoriously anarchic Beat Hotel on 9 Rue Git-le-Coeur, a stone's throw from the river Seine, where at various times, Allen Ginsberg, William Burroughs, Brion Gysin, and Gregory Corso had also stayed. Here he worked as chief editor for Olympia Press, brain-child of maverick publisher Maurice Girodias, who not only gave us 'forbidden' erotic pockets but also seminal literary work by trhe likes of Samuel Beckett, Vladimir Nabokov and William Burroughs. Sinclair saw The Naked Lunch through the press, going through the galleys with Burroughs on their arrival from the printers, and later he would persuade Jean Fanchette of Two Cities Press to publish the first anthology of cut-ups containing the work of its four principal technicians: Sinclair Beiles, Burroughs, Gregory Corso, & Brion Gysin. The book was called 'Minutes To Go'. The cut-up was a method later adopted as a helpful adjunct to his song-writing by David Bowie, and Sinclair would also claim that it had spawned Edward de Bono's Lateral Thinking, following Sinclair having given the Professor a tour of the hotel, during which Sinclair had pointed out some trays of snipped-up newsprint awaiting assembly and had described to de Bono how thought processes might be changed and paradigms shifted, just by means of a pair of scissors and some transparent tape —
thanks to 'cut-up'."