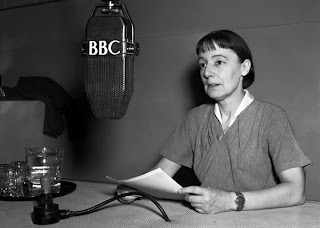 
Florence Margaret Smith, known as "Stevie Smith" (20 September 1902 – 7 March 1971) was an English poet and novelist. Born in Kingston upon Hull, was the second daughter of Ethel and Charles Smith. She was called "Peggy" within her family, but acquired the name "Stevie" as a young woman when she was riding in the park with a friend who said that she reminded him of the jockey Steve Donaghue.

Not Waving but Drowning

Nobody heard him, the dead man,
But still he lay moaning:
I was much further out than you thought
And not waving but drowning.

Poor chap, he always loved larking
And now he’s dead
It must have been too cold for him his heart gave way,
They said.

Oh, no no no, it was too cold always
(Still the dead one lay moaning)
I was much too far out all my life
And not waving but drowning.