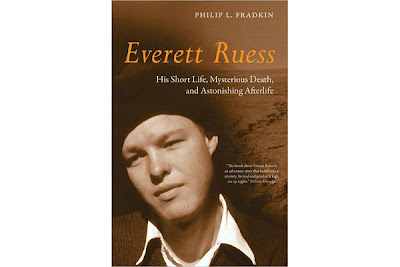 "Everett Ruess was twenty years old when he vanished into the canyonlands of southern Utah, spawning the enduring myth of a romantic desert wanderer. It was 1934, and Ruess was in the fifth year of a quest to record wilderness beauty in works of art; their value was recognized by such contemporary artists as Dorothea Lange, Ansel Adams, and Edward Weston. From his home in Los Angeles, Ruess walked, hitchhiked, and rode burros up the California coast, along the crest of the Sierra Nevada, and into the deserts of the Southwest." 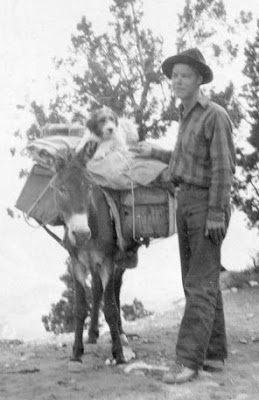 
Davis Gulch is the black hole into which Everett Ruess vanished in November of 1934. The erratic crease in the wrinkled landscape is like many similar indentations in the desert Southwest across which Everett wandered. It differs from most, however, because of the fleeting presence of the desert pilgrim and the mystery of his disappearance. Emotionally moved by Everett's story, others have followed him into the canyon during the intervening years. Some left their mark, like Everett, in various forms.

The arid canyonlands of southern Utah, and Davis Gulch in particular, are a hard and unforgiving landscape redolent with ancient human presences. Nearly impenetrable, gigantic slickrock battlements encase green fringes of vegetation along intermittent water courses. The trail and now a rough road head south from Escalante, avoiding the slot canyon beginnings of the gulch. The dirt road ends at Hole-in-the-Rock and the Colorado River. These are the remote borderlands between Utah and Arizona.

Disappearance was a recurring theme in these arid lands. The Anasazi vanished from David Gulch around 1300 C.E. They left ruins, which Everett combed for artifacts. Across the stream were a well-preserved kiva and the remnants of storage structures under a massive overhang. The elliptical kiva had survived nearly intact for almost a thousand years. The three-layered flat roof beams, thin sticks laid crossways, and an adobe roofing material partially covered the subterranean structure., It was nine feet in diameter and rose a little over five feet from the hard-packed dirt floor, in which a rectangular fire pit had been dug. Artifacts indicated a Kayenta, Arizona cultural origin from the south side of the Colorado River.

The writer-teacher-conservationist Wallace Stegner led me to Everett Ruess, whose trail I followed until it ended in David Gulch. Both westerners were shaped by landscapes and transcended their respective eras in their own distinctive ways. I read Stegner's book Mormon Country in the late 1970s in preparation for writing a book about the Colorado River and the West. The Stegner book mentioned Ruess's brief life, its fleeting promise, and his mysterious disappearance. Thirty years later I wrote a biography of Wallace Stegner. I described a man who lived a long, full life. I now write about a youth who lived a short, fragile life.

This book is the story of all of us and our loneliness and confusion during the teenage years, only writ large because Everett went to extremes. At that age our lives spread out like a topographical map before us, offering numerous diverging trails through the wilderness to choose from. How wonderful, how frightening, and how dangerous those years were. I hope readers, both young and old, can relate to Everett Ruess through either their own experiences or those of their children, a young relative, or a more distant youth. . .Everett's era forms the backdrop. His wanderings provide a snapshot of growing up nearly one hundred years ago on the East Coast and in the Middle West, the Depression years in California and the interior West, and the spaciousness of the national parks, monuments, and Indian lands in the Southwest.

In searching for a meaningful Everett Ruess, I sought the reality of who he was, or as close to that reality as I could get. I found the real Ruess to be far more interesting than the mythic one. I don't view him as a western Thoreau or a younger Muir, as some do. Those two men described and thought about their respective regions. Everett described places beautifully. However, he thought primarily about himself, which is perfectly understandable given his age. I don't know in what manner he would have matured, but I do know he was exasperating at times. This quality alone made him more human and interesting, at least for me, than the patron saint of western wilderness, as he has been portrayed.

After I began working on this project, others supplied a surprising addendum. Everett's bones were supposedly discovered three-quarters of a century after he disappeared and one hundred miles from where he had last been seen. Misguided and sales-driven journalism, as practiced by a publication of the National Geographic Society, drove the bad science that resulted in two false DNA positives. The third test, by a more experienced laboratory, proved that the bones did not belong to Ruess and that science has its own types of fragility. Then the silence of the desert returned.

Ruess was known for cutting linoleum prints of landscapes and nature and associated with Ansel Adams and Dorothea Lange. His prints show scenes from the Monterey Bay coast, the northern California coast near Tomales Bay, the Sierra Nevada, Utah, and Arizona.

Everett wrote no books during his life, but was a lifelong diarist and sent home hundreds of letters. His journals, art, and poetry were later published in two books:

His books are illustrated by the woodcuts for which Ruess is admired.