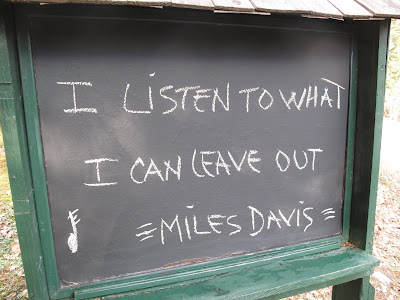 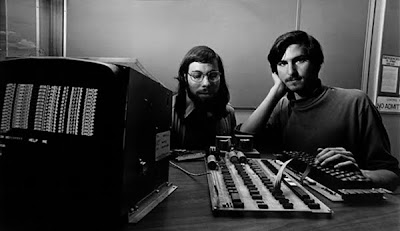 The Two Steves Back in the Day
(Steve Wozniak & Steve Jobs)

"While the whole “who’s a genius” debate is, in general, fraught and unwinnable, since genius itself is always going to be ill-defined, in the case of Steve Jobs it is even more fraught and even more unwinnable. In part, this is because the tech world, where most of us reside simply by owning cell phones and using computers, is not unlike the sports world or the political world: it likes a good rivalry. If, years ago, it was Microsoft versus Apple, these days it’s Apple versus Android, with supporters of one platform calling supporters of the other platform names (“fanboys” is a popular slur) and disparaging their intelligence, among other things. Call Steve Jobs a genius and you’ll hear (loudly) from Apple detractors. Question his genius, and you’ll be roundly attacked by his claque. While there is something endearing about the passions stirred, they suggest the limitations of writing a book about a contemporary figure and making claims for his place among the great men and women in history. Even though Isaacson has written what appears to be a scrupulously fair chronicle of Jobs’s work life, he is in no better position than any of us to know where, in the annals of innovation, that life will end up.

What Jobs did instead was to see how each of these products could be made better, or more user-friendly, or more beautiful, or more useful, or more cutting-edge (quite literally: there is a popular YouTube video making the rounds that shows the sleek new MacBook Air being used to slice an apple). A few years ago, in a profile in Salon, Scott Rosenberg called Jobs a digital “auteur,” and that description seems just right.

The template for Jobs’s career was cast in 1975, months before he and his friends set up shop in his parents’ garage in Los Altos, California, near Palo Alto. Jobs, who had dropped out of Reed College and moved back home, was hanging around with his high school buddy Steve Wozniak. Wozniak, a shy, socially awkward engineer at Hewlett-Packard, was drawn to a group of phone hackers and do-it-yourself engineers who called themselves the Homebrew Computer Club. It was at a club meeting that Wozniak saw an Altair, the first personal computer built from a kit, and he had the insight that it might be possible to use a microprocessor to make a stand-alone desktop computer. “This whole vision of a personal computer just popped into my head,” Isaacson quotes Wozniak as saying. “That night, I started to sketch out on paper what would later become known as the Apple I.”

Then he built it, using scrounged-up parts, soldering them onto a motherboard at his desk at night after work, and writing the code that would link keyboard, disk drive, processor, and monitor. Months later he flipped the switch and it worked. “It was Sunday, June 29, 1975,” Isaacson writes, “a milestone for the personal computer. ‘It was the first time in history,” Wozniak later said, ‘anyone had typed a character on a keyboard and seen it show up on their own computer’s screen right in front of them.’”

Wozniak’s impulse was to give away his computer design for free. He subscribed to Homebrew’s hacker ethos of sharing, so this seemed the right thing to do. His friend Steve Jobs, however, instantly grasped the commercial possibilities of Wozniak’s creation, and after much cajoling, convinced Wozniak not to hand out blueprints of the computer’s architecture; he wanted them to market printed circuit boards instead. They got to work in the Jobses’ garage, assembling the boards by hand. As Wozniak recalls it, “It never crossed my mind to sell computers. It was Steve who said, ‘Let’s hold them in the air and sell a few.’” It was also Jobs who pushed his friend to sell the circuit boards with a steep mark-up—Wozniak wanted to sell them at cost—and Jobs’s idea to form a business partnership that would take over the ownership of Wozniak’s design and parlay it into a consumer product. Within a month, they were in the black. Jobs was twenty-two years old. He hadn’t invented the Apple computer, he had invented Apple Computer. In so doing, he set in motion a pattern that would be repeated throughout his career: seeing, with preternatural clarity, the commercial implications and value of someone else’s work."

from The New York Review of Books "Who Was Steve Jobs? by Sue Halpern