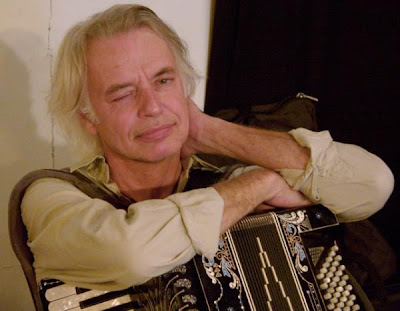 I'm arriving four years dreadfully late to the untimely passing of Lars Hollmer, my apologies to music heaven. Lars Gustav Gabriel Hollmer (21 July 1948-December 2008) is still too little known in the United States. He was and remains in his recordings a Swedish accordionist, keyboardist, composer and overall poet of sound space. His work has drawn from Nordic folk tunes to almost every style of music, all shown in his solo recordings or as a member of a half dozen groups. He was known to be giving of his talents and time to so many musicians and events. Most of his work was recorded at The Chickenhouse, his well outfitted studio in Uppsala, Sweden. Lars Hollmer passed away to cancer on Christmas 2008.