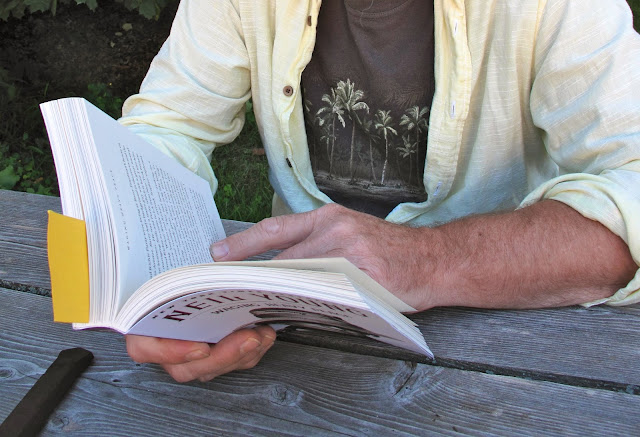 Don't take my word for it — I grew up on Neil Young, Art Pepper and Woody Guthrie — and although Neil Young's Waging Heavy Peace may not be quite the masterpiece (when he finally finishes writing his memoirs: he seems to be threatening many books) as these two other guys' classic autobiographies, it's as fine-feathered as Dylan's Chronicles volume one, and almost Levon Helm's This Wheel's On Fire. Almost. Helm's is trimmer, leaner, spookier, biting. Neil Young is a horse that runs to greet you at the fence.

If you told me he dictated the 500 page book as he tooled around in one of his Cadillacs, I'd say, "Makes sense." The book reads that way. If you grew up in the 60s and aren't bitter (not many left) and are interested in the 60s (some youngsters are), you might not be able to put the book down. I only do because eventually I have to get some sleep. And do some work.

Yes, Neil Young is wealthy, lives on a ranch he's owned since the early 70s on the Pacific coast, has been married three times and seems quite content with his third wife Pegi. One can feel this throughout the book and when watching them on stage performing. Young also bows with grace to his two previous wives, even some of his girlfriends, adores his children, has come to love many of his old musician friends as he's faced his own mortality, and no matter the riches and fame and drugs and serious medical seizures that have plagued him throughout his career (starting when he was cutting "After the Gold Rush" — at least — did any of us know? No.) his childhood, parents, siblings and extended family out of Canada are as close to him now as they have ever been. I believe it's the wide berth of Canada in the center of all his best songs, edged with an American dream broken, glued back, and broken again.

He broke a toe, and seems to be in Hawaii recuperating, songless, and trying to etch out this memoir. Much of the text reads as remembrance and likewise Live! talking-right-at-us from across the room, or in the driver's seat, out of the corner of the mouth, long sideburns. Young's a train lover, big cars and vintage trucks connoisseur, admitted materialistic fella, family man, and storyteller spinning out tales, vignettes, appraisals, strong opinions about the music industry (more power to him), and portraits. Some guys get all the breaks. More power to him. Power given to us.

The ultimate rich hippie, but with hard work, and dreams.
Plus the many songs that penetrate. . .let's not forget.
Long may he (we) run.