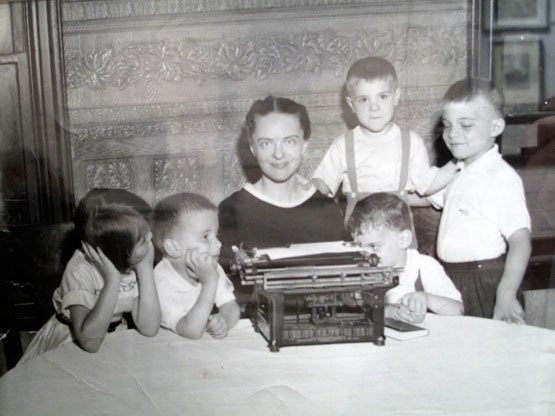 Here is Marie Ponsot, half circled by five of her seven children once upon a time — author of a first book, True Minds, published in 1956 by Lawrence Ferlinghetti for his City Lights Pocket Poets series, and a second book published twenty-five years later — Admit Impediment in 1981. During those in-between years, she divorced her husband, the French artist Claude Ponsot, and raised the children as a single parent. To help raise that family, Ponsot taught basic composition at Queens College. She also translated more than 30 books from French into English. One of those celebrated translations include versions of La Fontaine’s fables and Hans Christian Anderson’s fairy tales.
Her Collected Poems was one of remarkable books in 2016.

Bought from every peddler

Less for the ribbons and lace

Than for their scent

Of sleep where you will,

Walk out when you want, choose

Your bread and your company.

She warned me, “Have nothing to lose.”

She looked fragile but had

She loved her rooted garden, her

Grand children, her once

As best they can.

Labels: Inaugural anthology, Marie Ponsot
Newer Post Older Post Home
A poem (or more) will be offered by the hour or with the day and at the very least once a week. So stay on your webbed toes. The aim is to share good hearty-to-eat poetry. This is a birdhouse size file from the larger Longhouse which has been publishing from backwoods Vermont since 1971 books, hundreds of foldout booklets, postcards, sheafs, CD, landscape art, street readings, web publication, and notes left for the milkman. Established by Bob & Susan Arnold for your pleasure.
The poems, essays, films & photographs on this site are copyrighted and may not be reproduced without the author's go-ahead.
Write Bob or the Bookshop