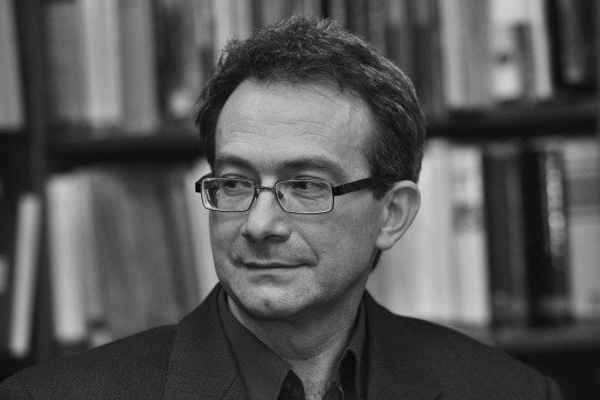 On the platter set out in the center of the Matyó-embroidered tablecloth
was the syringe. And around it was silence. My father
gazed at my mother, and she back at him. Slowly,
faltering, he began to speak. I was seized by
an unusual shuddering. I recall that he used the word fate,
and that if   I consented to the injected dose,
we could all fall asleep. We would stay together
for all time. And evade the uncertainty in mortifying
desperation. A fifteen-year-old’s desire to live
cried out in me: “No!” To which
my father stated: “If you want to live, then
we too must keep on living, because we can’t leave you
by yourself.” My father was the village doctor. I grew up
with no siblings. My mother’s sister lived next door,
with her husband and two children, Nelly and Gyurika.
In the evenings I prayed: “Merciful Lord of mine,
My eyes have closed, but thine, yet still are open, father mine,
Watch over me as I recline.” Then this: “In one God
I believe, in one homeland I believe, in the eternal
divine truth I believe, in Hungary’s re-
surrection I believe. Amen.” Gyuri could not study in Pest,
he went to Brünn. Later, not even there. Then the family
sent him to Toulouse. My mind could not comprehend. Then
one of uncle Vilmos’s servants murdered him with six ax-blows.
He screamed crazed into the courtyard: “That’s what
the stinking   Jew deserved!” I found him, his head smashed open.
I ran to my father, who didn’t even believe it. And one after
the other, the horrors came. Nelly lived in Újvidék
with her husband. Uncle Ernő was in the middle of shaving when
Hungarians broke into the flat. They were looking for the family.
The nanny quickly threw a quilt onto six-month-old Tomika,
they didn’t notice him. Peterke was out with Nelly. Uncle Ernő
was executed on the ice of   the Danube. Nelly did not recover.
She knitted pullovers, each more beautiful than the next, so as not
to feel the pain. She went to Pest to learn a trade,
so she could support her children. That’s how it was when
nineteen-forty-four came. On March 15, one of my teachers said,
“You remain seated,” while the class sang the Anthem,
“and be quiet.” On the day of the nineteenth, the Germans
invaded. From then on, it was obligatory to wear the star.
Through the intervention of the medical officer and the Lord Lieutenant, my father
could have stayed out. I had to move to the ghetto with my mother. My
father said “The family should stay together.” All up and down
our street they stood, to bid farewell. Father acknowledged
them, but already he was just waiting
for the end. He had aged by decades. Then the injection,
the one I already spoke of, turned up on the table with the
Matyó embroidery. We sat in the evening underneath the open sky
before being loaded onto the freight cars. The doctor from the next village
drank mercury chloride with his wife. Despite my father’s stomach lavage,
they succumbed by the morning. There were eighty of us in the wagon.
An expectant mother gave birth on the way. But with no water, my father
could not save them. There were those who went mad in the freight cars.
My father taught me always to say “Ich will
arbeiten.” On the seventh of   July the train stopped. Father read
the plaque, Auschwitz-Birkenau, and said, “We are
lost!” Megaphones blared, “Leave your packages
in the wagons, they will be brought to you later. Special vehicles
are coming for the sick and the elderly, just remain sitting,”
they repeated, “everything will be fine. Men exit
the wagon to the left, women to the right.” As farewell,
my papa said, “Always be my clever, my obedient, my good
little girl...    ” That is how we parted for eternity. Tomika and Peterke
were squeezing my hand tightly, but my mother said, “Don’t
you want to sit down? We can walk. Come...    ”
We moved forward in a column of five rows. The bulbs of the searchlights
blinded us in the eyes. A German officer, legs wide apart. He stood there
somewhere far away. Sent us to the right. Had to get undressed
in a room. Then they sent us into another, and the iron door slammed,
bolted shut. Screaming, I pounded on it again and again. We truly
were lost, as last I understood.... Turning around, the others
already shaved bald. I didn’t recognize anyone.
They stood there like sheep. Upon their skin, the writing of gooseflesh.

Labels: Hungarian Poetry, Ottilie Mullet, SZILÁRD BORBÉLY, The New York Review Books
Newer Post Older Post Home
A poem (or more) will be offered by the hour or with the day and at the very least once a week. So stay on your webbed toes. The aim is to share good hearty-to-eat poetry. This is a birdhouse size file from the larger Longhouse which has been publishing from backwoods Vermont since 1971 books, hundreds of foldout booklets, postcards, sheafs, CD, landscape art, street readings, web publication, and notes left for the milkman. Established by Bob & Susan Arnold for your pleasure.
The poems, essays, films & photographs on this site are copyrighted and may not be reproduced without the author's go-ahead.
Write Bob or the Bookshop