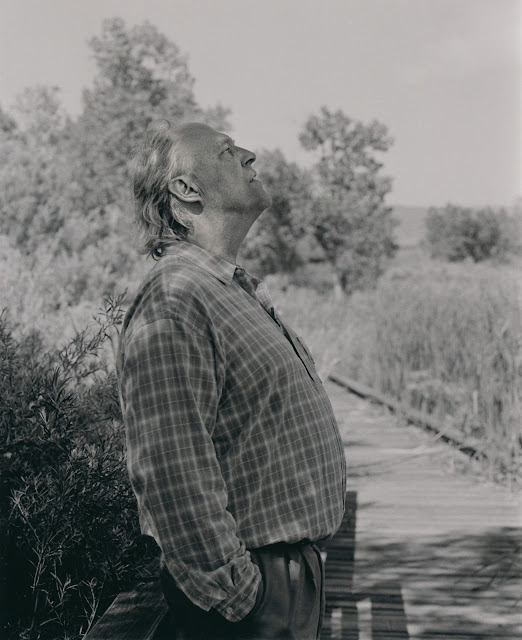 from The Warbler Road

I first heard of the Warbler Road just three years

ago, read of it in a used bookshop in Carolina, and

have thought of it regularly ever since. I was taken

with the term itself: the very idea of a human by-

way, or most anything else for that matter, named

after the wood-warbler group was rousing — no

matter that only a few bird people called it that. I

began to envision the place in the western Virginia

mountains not only as a good area to see birds, but

as a juicy conceptual transect in a most gifted part

of North America, a transect or a partaking, in the

tradition of Fuji viewing or honoring the solstice

at Chaco Canyon. And gradually, inadvertently in

truth, I began daydreaming the Warbler Road as a

sort of Way, a way of ordering one's priorities in life

so as to proceed, at a core aesthetic level, from war-

bler to warbler, something in the nature of Issa and

Another late night during that Christmas week

fresh with my new bookcase for tiny books, I

pulled out another title I always liked, and by a

writer I've had the pleasure of publishing three

times in the tiniest of fold-out booklets, Merrill Gilfillan.

I've read many books by Merrill and truth be told,

poetry or prose, every darn one is a keeper. Some,

exquisite in its design and printing care.

in the hands, just right in the head, and just

right in the heart. You'd want to build

a bookcase for that book.

Labels: Birding, Bob Arnold, Flood Editions, Jack Collom, Merrill Gilfillan
Newer Posts Older Posts Home
Subscribe to: Posts (Atom)
A poem (or more) will be offered by the hour or with the day and at the very least once a week. So stay on your webbed toes. The aim is to share good hearty-to-eat poetry. This is a birdhouse size file from the larger Longhouse which has been publishing from backwoods Vermont since 1971 books, hundreds of foldout booklets, postcards, sheafs, CD, landscape art, street readings, web publication, and notes left for the milkman. Established by Bob & Susan Arnold for your pleasure.
The poems, essays, films & photographs on this site are copyrighted and may not be reproduced without the author's go-ahead.
Write Bob or the Bookshop