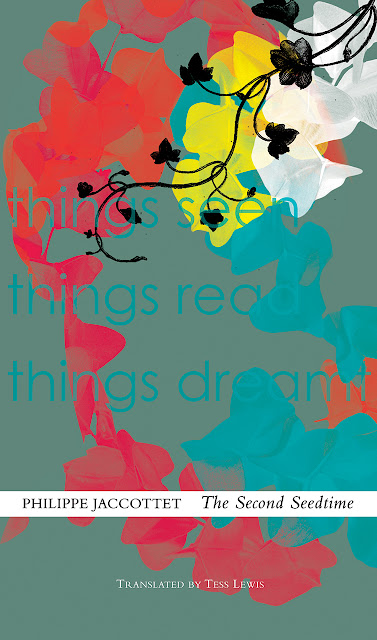 The stream: an advancing murmur, escorted by that
of the trees, of the birds hidden along its edges.

In Atoms of Silence, Hubert Reeves writes that
time passes more slowly at the bottom of a valley than
on the top of a mountain.

Of the pilgrim, he says: 'He must be taught to live
in the space between knowledge and vision, and to
take the precise steps that will lead him to the truth.'

There was that late winter, saturated with frigid
lights as if we were already being pursued by a
swarm of hail with most tender stings.

Then the knot of brooks came undone
like a braid.
The hail lived in the trees for a short
time . . .

The comet, sparkling, observed yesterday in the icy
night:  nothing more than a dandelion's feathery
sphere.

'The cold season.' It could be a title. Nothing that
burns, nothing that devours. As when we leave, and
naturally it's the case, whether we like it or not.
Nevertheless, the world is still there; the foliage
shines; the light on the morning horizon is a white
haze. The spider webs are also shining in the window,
fragile and tenacious — exemplary in this. There is no
way to feign 'perfect joy'.

Labels: Philippe Jaccottet, Seagull Books, Swiss-French Poetry, Tess Lewis
Newer Posts Older Posts Home
Subscribe to: Posts (Atom)
A poem (or more) will be offered by the hour or with the day and at the very least once a week. So stay on your webbed toes. The aim is to share good hearty-to-eat poetry. This is a birdhouse size file from the larger Longhouse which has been publishing from backwoods Vermont since 1971 books, hundreds of foldout booklets, postcards, sheafs, CD, landscape art, street readings, web publication, and notes left for the milkman. Established by Bob & Susan Arnold for your pleasure.
The poems, essays, films & photographs on this site are copyrighted and may not be reproduced without the author's go-ahead.
Write Bob or the Bookshop