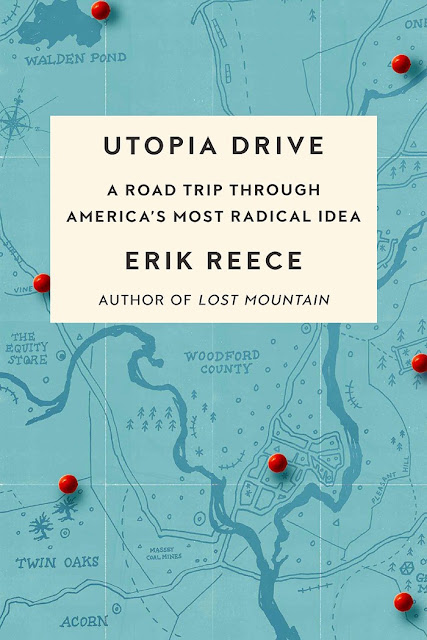 once again — a moment to grumble on book design
this one is quite unique for subject and we are
moving along on the highway, two-lane, lots of bends, hill country
searching for the lost utopia
in a one guy and his pickup truck
and we haven't seen a book quite like this one in adventurous spirit
since Blue Highways
but like I say, we are digging into the worm of the apple here —
utopian communities that at one time were speaking to this same
violent america as a possibility of
peace on earth —
indeed, bury it swiftly!
so the book is moving
allow it more space, wider margins,
a more relaxed and less jammed typography —
is the book world really going out as cheapskates?

If there is anyone in the younger generation
learned from the likes of Wendell Berry, Guy Davenport, Wes Jackson
I believe Eric Reece may be the one.

[Yet] "the Shakers lasted one hundred years at Pleasant Hill; the perfectionists turned a completely successful experiment in socialism into a wildly successful joint-stock company; Modern Times gave up equitable commerce only after proving that it worked. To say that these communities no longer exist — and as Twin Oaks proves, many of them still do exist — is not the same things as saying that they failed. The angel of history may yet salvage their blueprints from the detritus of the past. Because, after all, we still need these ideas so badly. In fact, we need them now more than ever before. During my utopian summer, the western ice sheet of Antarctica began breaking off into the ocean, which will cause sea levels to rise far more than scientists had predicted. Back in my hemisphere, the American Congress passed fifteen bills into law — total. Five percent of Americans continue to control 85 percent of this country's wealth, and since 1980, the wealthiest Americans have seen their incomes quadruple, while those of the poor and middle class have flatlined. The more this inequality grows, the sicker and more punitive our country becomes. The epidemiologists Richard Wilkinson and Kate Pickett have recently shown that every single societal problem, with no exception, can be tied directly to income inequality. As a result, the United States has higher levels of mental illness, infant immortality, divorce, obesity, violence, incarceration, and substance abuse than all the other countries north of the equator. "In more unequal societies," they wrote, "people are five times as likely to be imprisoned, six times as likely to be clinically obese, and murder rates may be many times higher." Consider these two statistics: the United States makes up5 percent of the world's population, but we consume 25 percent of its resources and we incarcerate 25 percent of its population. I don't believe those numbers are a coincidence Almost all the wealth from extracting those resources, those fossil fuels, goes to the very richest, and the very poorest end up in jail because either they can't get by or they find illicit ways to get by or simply cope. Money that might go into education or even food stamps goes instead into the penal system. Money that might fund badly needed American infrastructure instead funds 761 military bases all over the world. Money that might be loaned by a community bank is paced as a Wall Street bet that a bond will default. Money that might reward real work circulates instead inside the same echo chamber of less and less tangible securities. Wealth becomes less accessible to most Americans, while the wealthy themselves use their power to ensure that politicians do their bidding, mostly in the form of lowering their tax rates and deregulating the industries they control. Large corporations shell out $6 billion annually to employ thirty-five thousand D.C. lobbyists to protect their wealth. Such game rigging has bred cynicism and pessimism among the body politic, and as a result, we have the lowest voter turnout on the world's forty industrial democracies. The more we retreat from, or are pushed from, the public sphere of influence, the more we lose trust in our public institutions and in one another According to the National Opinion Research Center, levels of trust in the United States have fallen from 60 percent in 1960 less than 40 percent in 2004. Into that vacuum, the imperious One Percent pours more money and accrues more power. That decline in trust has paralleled a widening income gap in the United States — currently the largest of any country in the Northern Hemisphere and the largest in this country's history, according to the 2009 census. When trust weakens and economic inequality widens, an epidemic of social maladies follows What it all adds up to, said the Supreme Court justice Louis Brandeis, is this: "We may have democracy, or we may have wealth concentrated in the hands of the few, but we can't have both."

"We obviously have the latter in this country, and I've come to believe that things will only get worse if we don't engage in some serious utopian thinking. Fighting for something like campaign finance reform is laudable, but that isn't what I consider utopian thinking because it is an effort to fix a plutocratic system that doesn't deserve to be salvaged. It isn't enough. Utopian thinking by contrast and by definition, works outside the system, in a bottom-up fashion, to create a new paradigm and thus create a true form of democracy that is worthy of its name. In my view, such thinking must begin by addressing this country's most intractable problems, namely, our gross disparity in wealth and a fossil fuel-based economy that is completely unsustainable in the face of climate change, resource depletion, and the degradation of our ecosystems."

(typed with book open on my knees from pages 327-329, if you, reader, are following along)

Labels: Erik Reece, Henry David Thoreau, The Shakers, Thomas Merton, Utopia
Newer Posts Older Posts Home
Subscribe to: Posts (Atom)
A poem (or more) will be offered by the hour or with the day and at the very least once a week. So stay on your webbed toes. The aim is to share good hearty-to-eat poetry. This is a birdhouse size file from the larger Longhouse which has been publishing from backwoods Vermont since 1971 books, hundreds of foldout booklets, postcards, sheafs, CD, landscape art, street readings, web publication, and notes left for the milkman. Established by Bob & Susan Arnold for your pleasure.
The poems, essays, films & photographs on this site are copyrighted and may not be reproduced without the author's go-ahead.
Write Bob or the Bookshop