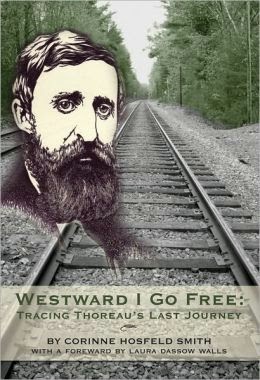 Gosh, what an ugly looking book. Your hand might not want to reach for it, but you should, the reading is a delight from both Henry David Thoreau's own time when he traveled by train in 1861 (one year before his untimely death) with young Horace Mann, Jr. (also an early fatality) from Massachusetts to Minnesota and back, to the 21st century author Corinne Hosfeld Smith's charmed and friendly prose. She's a librarian from Paxton, Massachusetts and I want to imagine an ideal one. She has much the same vigor, humor and hankering for detail that Thoreau had and she shares it throughout this sturdy portrait and study. This is the longest and least known of the Thoreau's excursions, which included up and in and around New England and the American Northeast, Canada (Quebec), Maine Woods and Cape Cod. As Thoreau scholar Laura Dassow Walls shares in her excellent introduction, "Walking became a form of thinking, which took shape as writing — he (Thoreau) once remarked that the length of his walks marked the length of his journal entries — and in his second essay, "A Walk to Wachusett," he wrote that "the landscape lies far and fair within, and the deepest thinker is the farthest travelled."

Labels: Corrine Hosfeld Smith, Henry David Thoreau (Westward), Laura Dassow Walls
Newer Posts Older Posts Home
Subscribe to: Posts (Atom)
A poem (or more) will be offered by the hour or with the day and at the very least once a week. So stay on your webbed toes. The aim is to share good hearty-to-eat poetry. This is a birdhouse size file from the larger Longhouse which has been publishing from backwoods Vermont since 1971 books, hundreds of foldout booklets, postcards, sheafs, CD, landscape art, street readings, web publication, and notes left for the milkman. Established by Bob & Susan Arnold for your pleasure.
The poems, essays, films & photographs on this site are copyrighted and may not be reproduced without the author's go-ahead.
Write Bob or the Bookshop