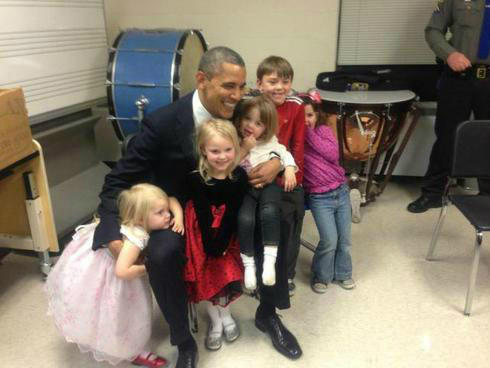 Some of what President Obama did tonight
in Newtown, Connecticut
The family of Emilie Parker, who was 6, and a victim, released this photograph to the public

"Human rights lawyer and law professor Bill Quigley writes that while the President offers condolences to the families of the 20 children shot in the massacre in Newton, Connecticut, he must also remember the countless children across the globe who die in tragedies every day, including "the 231 children killed in Afghanistan in the first 6 months of this year."

And on Friday, United Nations Secretary-General Ban Ki-moon stated in a report that ongoing violence in Afghanistan was taking an “unacceptable toll” on civilians, with an increase in civilian casualties of 28 per cent between 1 August and 31 October compared to the same period last year.

"Women and children are often the victims of the war between the Taliban and US-led Nato and Afghan forces, now in its eleventh year," the Irish Times writes in a report on Monday's blast."
(from "Common Dreams") 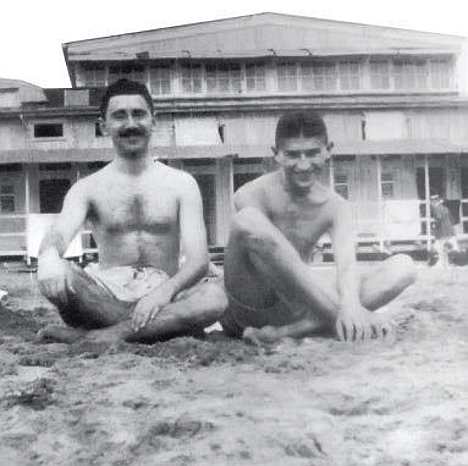 Max Brod and Franz Kafka
Because of Brod, we have Kafka ~
as executor he disobeyed Kafka's instructions to incinerate his life's work
and instead became his biographer
guardian angel

I was still and cold, I was a bridge, I lay over a ravine. My toes on one side, my fingers clutching the other, I had clamped myself fast into the crumbling clay. The tails of my coat fluttered at my sides. Far below brawled the icy trout stream. No tourist strayed to this impassable height, the bridge was not yet traced on any map. So I lay and waited; I could only wait. Without falling, no bridge, once spanned, can cease to be bridge.

It was toward evening one day — was it the first, was it the thousandth? I cannot tell — my thoughts were always in confusion and perpetually moving in a circle. It was toward evening in summer, the roar of the stream had grown deeper, when I heard the sound of a human step! To me, to me. Straighten yourself, bridge, make ready, railless beams, to hold up the passenger entrusted to you. If his steps are uncertain, steady them unobtrusively, but if he stumbles show what you are made of and like a mountain god hurl him across to land.

He came, he tapped me with the iron point of his stick, then he lifted my coattails with it and put them in order upon me. He plunged the point of his stick into my bushy hair and let it lie there for a long time, forgetting me no doubt while he wildly gazed around him. But then — I was just following him in thought over mountain and valley — he jumped with both feet on the middle of my body. I shuddered with wild pain, not knowing what was happening. Who was it? A child? A dream? A wayfarer? A suicide? A tempter? A destroyer? And I turned around so as to see him. A bridge to turn around! I had not yet turned quite around when I already began to fall, I fell and in a moment I was torn and transpierced by the sharp rocks which had always gazed up at me so peacefully from the rushing water.

it was all day yesterday afternoon, as Sweetheart drove, I read aloud these shortest of stories by Kafka