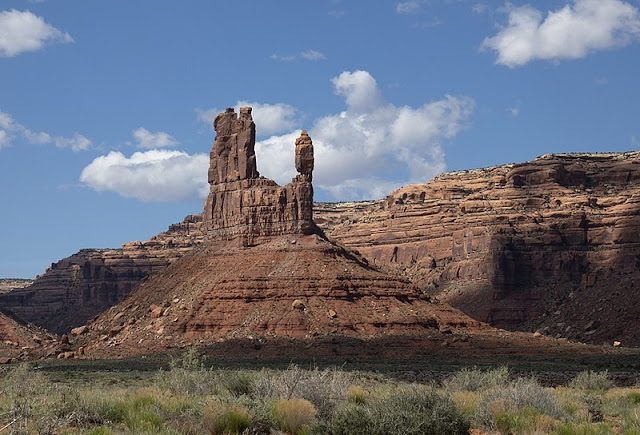 And then there was none. Imagine that, none. Non. No “e.”

No both Missouri and Mississippi Rivers. No Little Big Horn, grassy as it is. No Canyon De Chelly. No Valley of the Gods (Sweetheart and I once spent a day driving through it all), no big mitts, no Salt Flats, no Grand Canyon even, or ravens, or donkey, or burro, no trails. No Big Sur, no Jeffers, no Six Gallery, no Lew Welch, no Henry Miller, no Partington Ridge, no sea lions, no Lenny Bruce, no Walt Disney, no Mel Brooks. No Ferlinghetti! No Brautigan dead like your Redneck next door neighbor friend. No Eric Hoffer. No Jack London. No MFK Fisher. No Nob Hill, no Salish handmade homes, no Kesey, no Babbs, no Bill Russell. No Kobe. No Ivar’s Clam Bar. No Empire Builder. No Minott North Dakota snow. No Wisconsin Dells, no Chicago, no Sandburg, no Koller, no Dorn, no Hemingway, no Algren. Non. No Sherwood Anderson, no Lafcadio Hearn, no Gypsy Rose Lee. No OJ, no Jim Brown, no Johnny Unitas. No Mickey Mantle, Koufax, Mays. No Highway 61. No Jessica Lange photographs, no Flannery O’ Conner in the same town as Blind Willie McTell. No Muddy Waters. No Howlin Wolf, no Harry Partch, no US Highballin’, no John Cage, no you. No Skip James, no Death Letter, no Edward Abbey, Muir, Thoreau, Snyder, Beltrametti visiting, no knock at the door. No John Kerouac, no Jack Kerouac, no Visions of Cody, no Sal, no Dean, no James Dean. No Woody, no Arlo, no Cisco. No Dorothy Day, no Garbo, no Janine Pommy Vega. No border music. No border. No free range. No rocky coast, no Khatadin, no Baxter, no Moosehead Lake, no Gulf of Maine. No Smokeys. No Pullman. No E.B. White. No Nearings. No Woods Hole Alchemists. No Port Huron Statement. No Billie Holiday. No Monk. No Bird. No Coltrane. No Lester Bowie. No Huey Newton. No Fred Hampton. No Eric Dolphy. No Red Pine. No White Pine. No Route 66, no Peach Springs, no railroad, no box car, no lumber, no Chinese, no Sierra tunnels, no zoom zoom. No tap dance, no Fred Astaire, no Bojangles, no Jerry Jeff. No Dylan, no Zimmerman, no Blind Boy Grunt. No Pistol Pete, no Pike’s Peak, no driftin’ the night away. No Drifters. No rowboat, no sails, no Golden Gate Bridge. No Peckinpah, no Half Moon Bay, no ridin’ the high country. No Ishi. No Jaime. No Geronimo. No Hit the road, Jack. No Nat King Cole. No Easy Rider. No Last House on the Left. No David Goodis. No used books, no good books, no books. No trombone. No Pete Maravich. No Dr. J. No sky hook. No Blonde on Blonde. No Bardot. No Marilyn Monroe. No Tiny Tim. No cat, no dog, no bird. No wind chimes. No arroyo. No coyote. No dirt road. No back road caller. No habitat. No ink. No this land. No my land. No Woody.

Sunday morning, early, writ out of my brains to Peter in Maine, and no nothing left. Just a Rat and his serfs. Too bad you only had the old radio to listen to his drizzle the day after the impeachment came through, because everything about this Rat is seeing him in body action and expression, radio doesn’t cut it. House member Zoe sounds almost sexy and wanting by radio with her testimony after testimony during the impeachment trial; Sweetheart and I listened to her as we drove a great back road we like, all snow, in the furthest northwest corner of Massachusetts, around the only town that voted for this Rat in all of the Berkshire hills region and what is surrounding them is the most beautiful rural part of the colonial Massachusetts, where Mohawk once roamed, and on TV heavy set Zoe’s words are half lost in her body delivery of shuffle and shove. Her lean down to the microphone on radio sounds like a nuzzle to the ear, by TV she is never getting comfortable. To see this Rat in full action, nose dried out by terrible meds, face swollen and meaty and bleached around the eyes, the same terrible shit blue suit, long red hang-me tie, hair combed all from the back like James Dickey and Hemingway all did it, to hide the baldness, the baldness, the baldness. And every ugly human species that decorates Washington DC is in the big room with him, fuhrer style gathering, all on tenderhooks, all awaiting, and they actually give this cretin from Manhattan (sold beads so he had a place to exist) a corny but to them all real and regale “Hail to the Chief” proclamation horn playing straight out of a Key & Peele skit where they played Obama for fun and exactness (Jordan Peele who would go on to make two classics for cinema: Get Out and Us) and the warped music tone plays precisely all over this big empty blue suit delivery and this one who gave us the None. The Non. Is about to deliver everything he is up to next, and if you’ve been paying close attention — none of it will be a surprise — 'if you love me, I love you / but if you hate me, I hate you, and I will come and get you.' And somehow I have all the power in my empty hateful-eight head, straight out of the Chauncey Gardner school where like Chauncey I learned everything from TV, so one best watch TV to know where I’m coming from. It doesn’t do any good to just make fun of me, ignore me, think this big bag of suit I am is simply going to blow away, and take Teddy Bear Billy Barr with me, Rudy-Judy, Pom Pom Pompeo, Mick the Dummy, and Snow White Mike Pence. Uh Uh, ain’t happening. I own all three government branches, you should have been paying attention. I stole one election and if you think I’m going to be bothered to take the time and effort to steal the next election, you’re crazy. I’m simply calling off the next election for government safety. I’m enacting martial law. Executive Action. For the good of the country. And all the while I’m erasing the entire Democratic Party. I did it with the impeachment. By 2021 there will be no impeachment. Oh there will be for Billy Clinton, but not me. I’m having the House of Reps erase my impeachment when they take over the House, and if they don’t take it over, they’ll manage anyway. The only street fighters in the Democratic Party are the Bernie people and they’re all Communists. Did you hear me, Communists! You better believe it. So I’m having a great time watching the Democrats fall over themselves debate after debate, really sweatin’ it up, man against girl, girl against girl, black against white, rich against normal, gay against straight, dummy against smartie, media against debaters, media against media, mogul against mogul, mogul against all, and me, big bag of blue suit bullshit steering it all.

First published on Valentine’s Day 2020 at Longhouse, and digitally at ~ Dispatches from the Poetry Wars ~
kudos to Kent Johnson & Mike Boughn

Labels: "Non(e)" Bob Arnold, Americana, Longhouse
Newer Posts Older Posts Home
Subscribe to: Posts (Atom)
A poem (or more) will be offered by the hour or with the day and at the very least once a week. So stay on your webbed toes. The aim is to share good hearty-to-eat poetry. This is a birdhouse size file from the larger Longhouse which has been publishing from backwoods Vermont since 1971 books, hundreds of foldout booklets, postcards, sheafs, CD, landscape art, street readings, web publication, and notes left for the milkman. Established by Bob & Susan Arnold for your pleasure.
The poems, essays, films & photographs on this site are copyrighted and may not be reproduced without the author's go-ahead.
Write Bob or the Bookshop