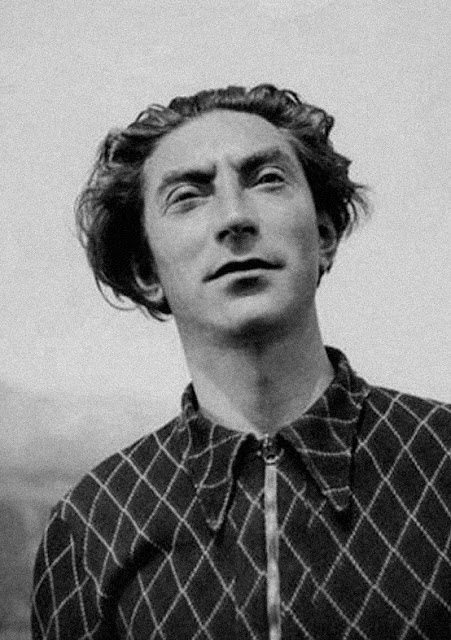 
I've walked behind someone — and it was not Him.
That was no real street,
a street right away leading to another street
and that one in its turn
to another wider street, and then another, even wider —
and suddenly the dancing lights gushed in all directions . . .

I walked on, I feared that it was not Him:
this was no real presence,
a life which right away trails off into another life
and that one in its turn to
an unknown life even more on fire, and then more than on fire —
and suddenly this lurid collapse, Love . . .

He went on advancing — and it was not Him.
I followed him. I was two steps from his shadow.
It was a slow pursuit,
so slow and so far outside of time
that the morning sky suddenly displayed its swamps
and that the roosters were strangled
and exploded into the center of the sun,

a huge real sun which kissed me on the lips.

Fondane was a Romanian Jew who emigrated to France in 1923 to pursue his love of
French poetry and culture. In Paris he worked at an insurance company and for
Paramount Pictures while establishing himself as a poet and a leading exponent of
existential philosophy. In 1944, he was deported from France and killed at Auschwitz.

Labels: Benjamin Fondane, New York Review of Books
Newer Posts Older Posts Home
Subscribe to: Posts (Atom)
A poem (or more) will be offered by the hour or with the day and at the very least once a week. So stay on your webbed toes. The aim is to share good hearty-to-eat poetry. This is a birdhouse size file from the larger Longhouse which has been publishing from backwoods Vermont since 1971 books, hundreds of foldout booklets, postcards, sheafs, CD, landscape art, street readings, web publication, and notes left for the milkman. Established by Bob & Susan Arnold for your pleasure.
The poems, essays, films & photographs on this site are copyrighted and may not be reproduced without the author's go-ahead.
Write Bob or the Bookshop