and here's another version, and my favorite, of Susan's favorite
and soon your favorite. . . 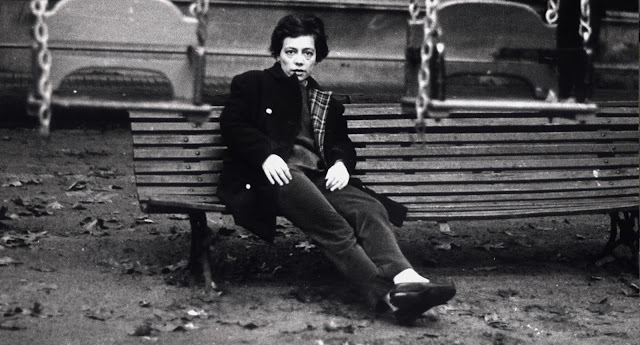 
They closed the face that was identical to the highest dream of an
imperial childhood, and spooked birds in a frantic rush of black feathers made a perfect terror of the landscape. I am your silence, your tragedy, your watcher. Though I'm only night, though every night of my life is yours.


This untimely tempest, these rails on the girls of my eyes, this little
love story closing like a fan that would open to reveal a hallucinated
beauty, the most naked woman of the forest in the musical silence of
an embrace.


I was the source of discord, the owner of dissonance, the girl of the harsh counterpoint. I would open and close with such pure animal
rhythm.


IN THE OPEN DARKNESS


If the smallest death demands a song, then I should sing to those
who used to be lilacs, who, for the sake of accompanying me in my
black light, silenced their fires when a shadow shaped by my cries
took refuge among their shadows.


And why did she speak as if silence were a great wall and words
were the colors destined to cover it? And who was it who claimed to
feed on music and wasn't able to cry?


Night blindly mine. I dream of a body as transparent as a tree made of glass.

Horror of searching for your eyes in the space that is full of the
screams of this poem.


Noise of someone going up the stairs. The woman of torments, the one who returns from nature, goes up the stairs, from which a trail of blood is flowing. The flower of distance is burning black birds in the hair of the solitary woman. We have to rescue not the flower, but the words.


Night falls, and the dolls project marvelous images in color. Each
image is linked to another by a small cord. I listen, one by one, and
very distinctly, to noises and sounds.


ALEJANDRA PIZARNIK (1936-1972) was born in Argentina to Russian Jewish immigrants and was educated in both Spanish and Yiddish. She published her first three books of poetry while studying at the University of Bueno Aires and then spent several years in Paris as a writer, critic, and translator. In addition to poetry, Pizarnik also wrote experimental works of theater and prose. She died of a deliberate drug overdose at the age of thirty-six.

Labels: Alejandra Pizarnik, New Directions, Yvette Siegert
Newer Posts Older Posts Home
Subscribe to: Posts (Atom)
A poem (or more) will be offered by the hour or with the day and at the very least once a week. So stay on your webbed toes. The aim is to share good hearty-to-eat poetry. This is a birdhouse size file from the larger Longhouse which has been publishing from backwoods Vermont since 1971 books, hundreds of foldout booklets, postcards, sheafs, CD, landscape art, street readings, web publication, and notes left for the milkman. Established by Bob & Susan Arnold for your pleasure.
The poems, essays, films & photographs on this site are copyrighted and may not be reproduced without the author's go-ahead.
Write Bob or the Bookshop