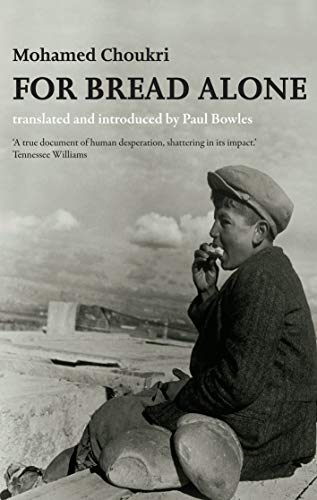 Mohamed Choukri (1935-2003) was a Moroccan writer and novelist, perhaps best known for his internationally acclaimed autobiographical novel, For Bread Alone. Enduring a childhood of poverty, homelessness and violence, Choukri eventually learned to read and write  in prison at the age of twenty. He went on to become a teacher and writer, and was awarded the chair of Arabic Literature at Ibn Batuta College in Tangier. Translated into more than thirty languages, Choukri works include Streetwise and In Tangier, which brings together his accounts of his encounters in the 1960s with Paul Bowles, Jean Genet and Tennessee Williams.

Because I have translated several books from the Arabic I want to make a clear differentiation between the earlier volumes and the present work. The other books were spoken onto tape and the words were in colloquial Arabic called Maghrebi. For Bread Alone is a manuscript, written in classical Arabic, a language I do not know. The author had to reduce it first to Moroccan Arabic for me. Then we used Spanish and French for ascertaining shades of meaning. Although exact, the translation is far from literal.

It has been my experience that the illiterate, not having learned to classify what goes into his memory, remembers everything. This too is a technique. Total recall is like perfect pitch: it means nothing in itself, but it can be extremely helpful to the writer who uses it professionally. It seems almost a stroke of good luck that Choukri's encounter with the written word should have come so late, for by then his habits of thought were already fully formed; the educative process did not modify them. As a writer, then, he is in an enviable position, even though he paid a high price for it in suffering.

Choukri grew up under conditions of poverty excessive even for Morocco. Eight of his brothers and sisters died of malnutrition and neglect. Another brother was killed outright by Choukri's father in an access of hunger and desperation. Mohamed and one of two others managed to survive, even under these worst possible circumstances. For Bread Alone records his struggle for survival, up to the time the young man made the resolve to become literate. To have taken and implemented such a decision at the age of twenty is unusual.

To have passed in the space of five years from language the letters of the alphabet to writing poems and stories is even more unexpected.

Labels: ARABIC LITERATURE, MOHAMED CHOUKRI, Paul Bowles
Newer Posts Older Posts Home
Subscribe to: Posts (Atom)
A poem (or more) will be offered by the hour or with the day and at the very least once a week. So stay on your webbed toes. The aim is to share good hearty-to-eat poetry. This is a birdhouse size file from the larger Longhouse which has been publishing from backwoods Vermont since 1971 books, hundreds of foldout booklets, postcards, sheafs, CD, landscape art, street readings, web publication, and notes left for the milkman. Established by Bob & Susan Arnold for your pleasure.
The poems, essays, films & photographs on this site are copyrighted and may not be reproduced without the author's go-ahead.
Write Bob or the Bookshop