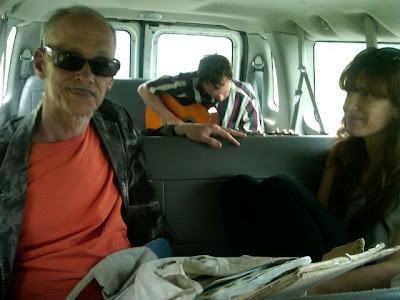 John Waters traveling with members of the band Here We Go Magic as he hitchhiked from Baltimore to San Francisco.

By the way — this photograph of real time travelers on the road, looks far more true than any film still I've seen from the new film On the Road. As in the classic novel:
a guy, a guy & a girl. 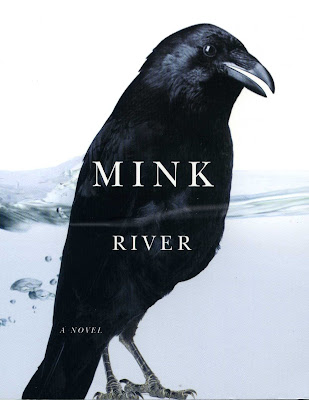 
The young she-bear is away up in the hills near the meadow where Maple Head and No Horses are holding each other and laughing and laughing. The bear had smelled them before she heard them and now she sees them, holding each other and rocking slightly like slender trees in great winds. The bear's two cubs trundle along behind her in ragged parade order, fascinated by bees and berries. By now the cubs have names in the dark tongue of bears. The smallest is called smallest and the largest is called eats snakes. These are their very first names. Bears wear many names over the course of their lives, sometimes carrying several at once. Names having to do with lust are forbidden by ancient custom. There have been bears in these hills for four million years. Bears remember everything having to do with bears. Bears love eating more than remembering stories about bears but it is a near thing. One time a small bear killed a wolverine in an argument about an elk calf and that story was told for seven thousand years, mothers telling it to their cubs in the cold dark places where they prepared to sleep through the winter. There are stories of white bears and blue bears who swam in the sea and bears who could learn the languages of other animals and a bear who could climb even the thinnest trees even when she was very old. There was a bear who killed a whale trapped at low tide in the mouth of the river, that was a story told for many years, and a bear who would eat only fawns, and a bear who would eat only fish, and a bear who destroyed any horse he ever found, and a bear born without rear legs who lived on berries and nuts and never left the meadow where he was born, and bears who climbed trees to eat the eggs of eagles, and a bear who clambered onto a log in the river just to see what would happen and the river carried him out through the surf and he went away into the sea and was never seen again. That is the story of the bear who went into the sun, a story every bear hears while young. Bears do not tell stories about animals other than bears. By ancient custom all stories about other animals are told through the manner in which they affect the lives of bears. So that cougars, for example, who are called deereaters in the dark tongue of bears, figure greatly in the stories of bears, but always through stories of bears who fought them, or outwitted them, or tricked them into leaping on dark bushes they had mistaken for bears, or ate their tails, or lost an eye to their razor fingers, or imitated their yowling so successfully that they would come bounding toward romance and find instead a bee's nest, which is a story that happened to a bear who once lived not far from where Maple Head and No Horses are still laughing at the ouzel, who is still wondering what to make of the new liquid noise in the world. 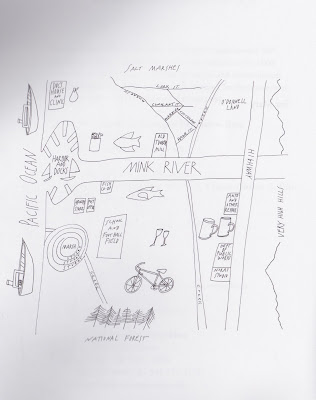