THERE IS NO EXILE WHERE THE HEART IS PURE ~ 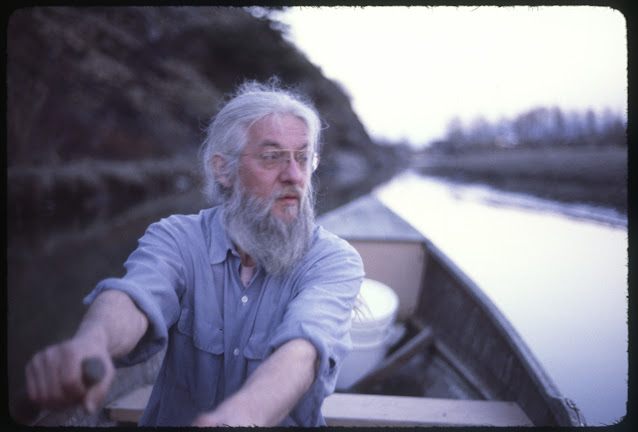 There Is No Exile Where The Heart Is Pure

Behind the barn, the first week of March, on a bright

turns round and round in the sunlight.

rubs himself on the corner of the barn.

Little pieces of cedar glide down where the ants are

calling home their old senators who

they pass through small American towns.

On the barn wall,

rusted nails bleed; and in fences, in hinges, in boards.

The horse (I think of Casals in exile!) plays

a suite unaccompanied in the silver cedar boards.

trickle to the earth.

blue ridges and rivers coming and going through it —

rests on the white sheet of the windows.

and a wedge of healing sunlight

slips into the barn before her.

it's strange, each time I type out Robert Sund's

name it shows up as Robert Sung — as if he is

returning (as I type) or has indeed returned —

to the Sung Dynasty, where of course he belongs.

This book, signed by Sund, I have no idea where

it came from — maybe a good friend, a lucky find?

here in New England — far from the Sund home of

Washington State — where as I boy in the late 60s I

and crowded the book into my work lunchpail as

a great companion with me at midday. "Whatcha

Labels: Pablo Casals, poetry, Robert Sund
Newer Posts Older Posts Home
Subscribe to: Posts (Atom)
A poem (or more) will be offered by the hour or with the day and at the very least once a week. So stay on your webbed toes. The aim is to share good hearty-to-eat poetry. This is a birdhouse size file from the larger Longhouse which has been publishing from backwoods Vermont since 1971 books, hundreds of foldout booklets, postcards, sheafs, CD, landscape art, street readings, web publication, and notes left for the milkman. Established by Bob & Susan Arnold for your pleasure.
The poems, essays, films & photographs on this site are copyrighted and may not be reproduced without the author's go-ahead.
Write Bob or the Bookshop