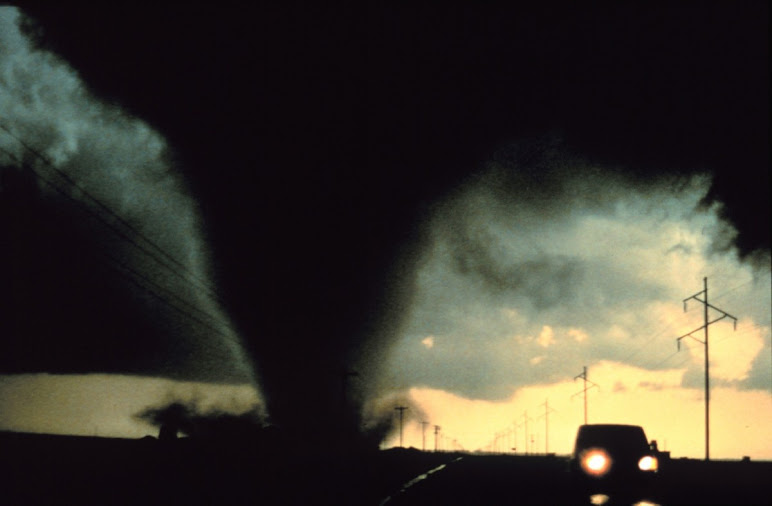 when the Walter Shuhler farm

was about fixed up as a dairy,

a cyclone came up Butter Valley,

Sunday evening, "a little before nine —

"We were in the barn. Didn't hurry.

We had this and that to do,

but as we came to the house,

we saw it was very black,

and I noticed a flickering, I said to Florence,

'It's a cyclone over the hill there.'

I recognized it from Kansas,

we ran then. I wanted to pull the electric switch

in the cellar. I told the family,

'Keep away from the window.'

Lucky they were all inside.

When I pulled the switch, it was pitch dark.

I didn't know they were from my own house.

There was a kind of deep roaring hum

that the wind and pressure make.

Everything was rocking and shaking,

whatever could shake. It was over

in about fifteen seconds.

We were the worse hit in the valley.

The house roof was off altogether,

and the chimneys. Most of the windows frames

were pushed right in. Outside,

everything was mashed up. The silos down.

All the big trees were over, flattened.

You can still see the stumps.

It came from the south

and was only a few hundred feet wide.

We were hit right in the middle.

If it wasn't for the house that split it,

it would have taken the barn. As it was,

when the house split it,

one part went down this way

and took the roof off a small pig stable.

The other part went that way

and took a chicken house, everything —

took it all away. The chickens

were scattered on the hill and next day

came walking back. I heard a few

were down in Clayton close to that

manufacturing place down there.

but on the barn side near the house

about fifteen feet of boards

broke where the house roof blew against it

and pushed the frame about two inches.

But just so the barn stayed. Lucky

the cattle were in the barn, it didn't hurt them.

I had started to make a hen house

out of a temporary croncrib.

I had two two-by-fours

and the wind tore one of them to pieces

and din't touch the other.

Still it wasn't as bad as a fire.

But it was bad enough.

The trees that were over broke fences.

We were most of the night clearing the lane.

shingles, tin, and nails lying all over

in the meadow and the fields.

If the cows eat wire or nails,

it will kill them, so we carefully

cleaned off the meadow first — that was still

where we mainly fed the cows —

and let the cows out. We put

a canvas over the house roof

and four days later, by Thursday,

we had the roof back on.

It was a cyclone, all right. Strange,

there never was one before

and never was one before

and never has been one since.

I've seen it in Kansas, a cloud

let down a wind funnel that would shoot along

faster than you could run

and everything it touched was gone.

that Kansas would chase you here?"

Poems of the Pennsyvania Dutch

a gem of a book, published when Millen Brand was nearly 70 years old, having written the collection over some thirty-five years. Brand  is Pennsylvania German on his mother's side and lived for many years on Crow Hill near Bally amongst the farmers, tradesmen, factory workers, women and children and fellow storytellers. There is no book of poems like this one. The poems John Berger drew out of rural France in Pig Earth is akin, as is Drum Hadley's Borderland, and I'll be drawing from both those books over the next few weeks.

Labels: Millen Brand, Pennsylvania Dutch, poetry
Newer Posts Older Posts Home
Subscribe to: Posts (Atom)
A poem (or more) will be offered by the hour or with the day and at the very least once a week. So stay on your webbed toes. The aim is to share good hearty-to-eat poetry. This is a birdhouse size file from the larger Longhouse which has been publishing from backwoods Vermont since 1971 books, hundreds of foldout booklets, postcards, sheafs, CD, landscape art, street readings, web publication, and notes left for the milkman. Established by Bob & Susan Arnold for your pleasure.
The poems, essays, films & photographs on this site are copyrighted and may not be reproduced without the author's go-ahead.
Write Bob or the Bookshop