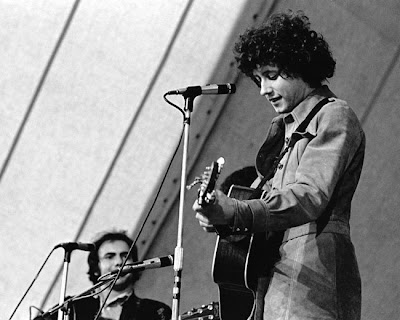 
A registered Republican (you heard right), Arlo Guthrie, son to Woody, told the New York Times once upon a time, "We had enough good Democrats. We needed a few more good Republicans. We needed a loyal opposition."


Guthrie received religious training for his bar mitzvah from Rabbi Meir Kahane (you heard right), who would go on to form the Jewish Defense League. "Rabbi Kahane was a really nice, patient teacher," Guthrie later recalled, "but shortly after he started giving me my lessons, he started going haywire. Maybe I was responsible."


Most likely his most famous song — "Alice's Restaurant Massacree" — is a smoking talking blues song that lasts 18 minutes and 34 seconds in its original recorded version. Some live versions have been known to roll along like a Conestoga wagon for almost an hour. I know, I've been there. The songwriter and performer has pointed out that the original recorded version of the song was also the exact length of one of the famous gaps in Richard Nixon's Watergate tapes. Was Tricky Dick listening to "Alice's Restaurant Massacree"? We may never know.


Born in 1947 and one of the original Brooklyn cowboys (born there), Arlo spent some of his later youth in the Berkshire Hills of Massachusetts where he settled with his wife Jackie and raised a great brood of more musicians and more musicians have been raised then from there. That Guthrie musical legacy is river deep and wide. Many of his earlier albums are sadly out of print, but can be found in dollar bins and tag sales and similar places of treasury and wonder. I've included here one of those treasures from an early album — the "motor-cicle" song, or the "pickle" song — however you wish to remember it. Once heard, never forgotten. Only Arlo Guthrie.

I saw Arlo Guthrie perform twice, both times in the Berkshire hills, our home. I hiked to both places with friends and sat down — one was on the hillside at The Music Inn in Lenox, Massachusetts, summer of sometime (probably 1969). He was very closeby to the hometown of Alice's Restaurant (nearby Stockbridge), and it was July 4th, and the song just sort of talked off off his tongue. An earlier time with Arlo was at Woody's Bar, or as it's known Woody's Roadhouse (now gone) in Becket, Massachusetts. Locals all said "bar", and it was, and Arlo sat on a stool and played like we were all visiting in his kitchen. He was much younger is my memory, and what my older sister described as "Amazonian blondes" were dancing on the floor. Maybe 20 of us were there.


It's Woody Guthrie's 100th birthday this year. We just heard there will be a July concert celebrating Woody in Greenfield, Massachusetts and Arlo and his music family of players will be there.