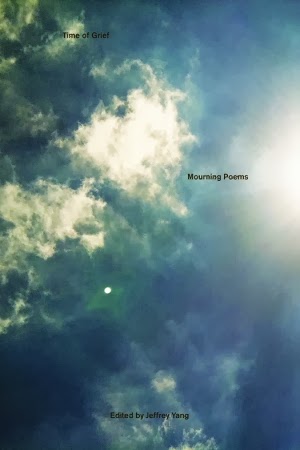 The bulk of the poems in this anthology were first published from New Directions which has a deep and nurturing trough to draw from. Well chosen by a bright editor who has divided the poems into forty-nine days as you look over the table of contents, "or stations, of grief," as described by Jeffrey Yang. "Each day consists of a poem or a series of poems for the reader to slowly read, re-read, and dwell upon. Its structure echoes a simplified Buddhist calendar of mourning — the forty-nine bardo days of chants and ritual meditation that assist the dead on their journey to the next life. These imperative words are spoken not only to the dead, but to the living, directed to one's self, words bearing both memento mori and the promise of rebirth." On further reflection, the editor discovered another 49-day period of mourning, observed in the traditional Jewish calendar, "outside of the week-long shivah, between Passover and Shavuot, called the Counting of the Omer." Both of these traditions hold guidance. I also put the book before a young poet's eyes who skipped the editor's introduction, could care less about the table of contents and just started reading, locating poets or even forms of poems that instantly meant something to him. I, on the other hand, reached for my glasses because the type font is too small. That is my only negative remark about a book that fits nicely into the palm of your hand.


sure — rest in peace
but what about the damp?
and the moss?
and the weight of the tombstone?
and the drunken gravedigger?
and the people who steal the flowerpots?
and the rats gnawing at the coffins?
and the damned worms
crawling in everywhere
they make death impossible for us
or do you really think
we don't know what's going on. . .

let's cut the crap
when you stand at a wide open grave
it's time to call a spade a spade:
You can drown your sorrows at the wake
we're stuck at the bottom of the pit.


Translated from the Spanish by Edith Grossman

in memory of philip seymour hoffman

Labels: Edith Grossman, Jeffrey Yang, New Directions, Nicanor Parra, Time of Grief
Newer Posts Older Posts Home
Subscribe to: Posts (Atom)
A poem (or more) will be offered by the hour or with the day and at the very least once a week. So stay on your webbed toes. The aim is to share good hearty-to-eat poetry. This is a birdhouse size file from the larger Longhouse which has been publishing from backwoods Vermont since 1971 books, hundreds of foldout booklets, postcards, sheafs, CD, landscape art, street readings, web publication, and notes left for the milkman. Established by Bob & Susan Arnold for your pleasure.
The poems, essays, films & photographs on this site are copyrighted and may not be reproduced without the author's go-ahead.
Write Bob or the Bookshop