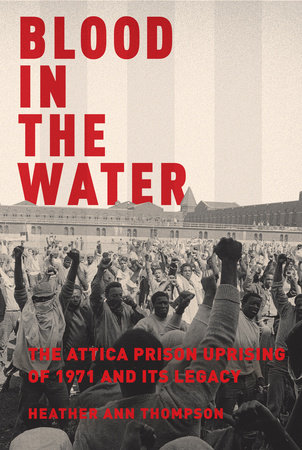 Long before "9-11" this was an earlier 9-11, the Attica Prison Uprising in upstate New York told with the clear-eyed scope of a storyteller's eye by historian Heather Ann Thompson — and this may be the strong thread of the book, amongst the revealing horrors long hidden — is Thompson's straight-edge sturdy report.
Don't delay.

In Attica they killed black, brown and white all the same, even the guards, officials, anyone in the way. The State Police had issued shotguns and very few had ever used a shotgun in riot formation. Buckshot did the most damage. Plus toxic gas and powder dropped from a helicopter Vietnam style. It was the year of post Cambodia, Laos, Parrot’s Beak, the war coming to a halt and the US losing. They’re still angry. Still losing. Americans have the lousiest teacher in world history next to various other fascists. In all our cities, their governments, now in small towns' corrosive politics and, I know, ingrained in rural routes.

Labels: Attica Prison Uprising (1971), Heather Ann Thompson, Tom Robbins
Newer Posts Older Posts Home
Subscribe to: Posts (Atom)
A poem (or more) will be offered by the hour or with the day and at the very least once a week. So stay on your webbed toes. The aim is to share good hearty-to-eat poetry. This is a birdhouse size file from the larger Longhouse which has been publishing from backwoods Vermont since 1971 books, hundreds of foldout booklets, postcards, sheafs, CD, landscape art, street readings, web publication, and notes left for the milkman. Established by Bob & Susan Arnold for your pleasure.
The poems, essays, films & photographs on this site are copyrighted and may not be reproduced without the author's go-ahead.
Write Bob or the Bookshop