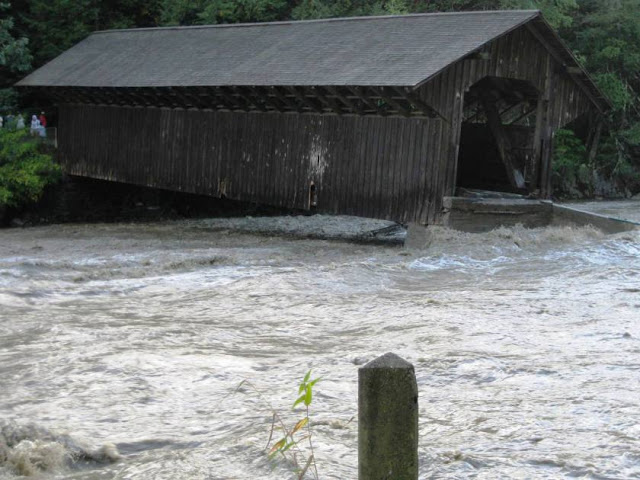 A Hurricane & Its People

we had a hurricane

and then a flood

and both were termed

which means no one

around now had ever

not the road workers who would

have to rebuild all the roads

not the town officials who had to walk

in the muck and seem like they were officiating

none of the people standing there destitute

none of the woods where we lived had any idea either

it just parted with the waves, trees went away, and

the day and the night time roared

our bodies still went to sleep

our bodies still got up

the river slowly but surely subsided

some houses were gone forever

hundreds of thousands of trees vanished

roads to get us places were gone

you could walk but our woods neighbors

insisted on driving, and one time we came

home on our bicycles and caught a straight course

bed of dry rock and rubble and mistreatment

at the same time was trying

to drive on this old road memory as

a river bed, with the flooded river receded

and it was the largest traffic jam we’d ever seen

and will probably ever see out here in the woods

since percentages say it won’t happen again until 100 years

it will take that long to get this image

out of my memory

And another time after that hurricane and flood

we were hiking along the river on our land

to have a look around, to see what was out of place

and we found a campsite tucked away

as if trying to hide

built there by neighborhood boys

old enough to build something nice out of stone

they just took the land over

had their friends over

built a big fire and drank with

their friends and enjoyed themselves

when we found the campsite it looked

well placed stones in a ring and some built into

chairs like thrones — someone had put a great deal

of thought into the sacred site — it would take

savvy to move them off and put the stones away

this had to happen, we don’t want fires on our land

we want the land as land

but for the time being we knew the young men

needed a place for counsel, a place to prove themselves

as victors and survivors after the hurricane, and a party

now and then is good for this

so we let time pass, through winter

until spring, and then we spoke to

in shape, walk and disposition

she wanted nothing to do with our ideas

for our own land, she saw nothing wrong

with her children out of her house and freely

distributed to our land and their campsite while

regaining her own place in her own house

we broke apart the campsite ourselves

dealt with the young men and all that ugly

the majority who live on our road, siding

against us and believing people should be

able to do as they wish

except of course when you wish to do it to them

overnight the world had become rotten

or to be kinder — confused

and still it snowed

Labels: Bob Arnold (Heaven Lake), Hurricane Irene, Vermont
Newer Posts Older Posts Home
Subscribe to: Posts (Atom)
A poem (or more) will be offered by the hour or with the day and at the very least once a week. So stay on your webbed toes. The aim is to share good hearty-to-eat poetry. This is a birdhouse size file from the larger Longhouse which has been publishing from backwoods Vermont since 1971 books, hundreds of foldout booklets, postcards, sheafs, CD, landscape art, street readings, web publication, and notes left for the milkman. Established by Bob & Susan Arnold for your pleasure.
The poems, essays, films & photographs on this site are copyrighted and may not be reproduced without the author's go-ahead.
Write Bob or the Bookshop