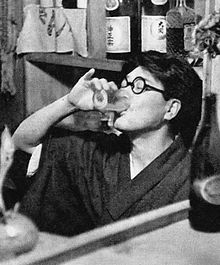 what a lovely moon.

zebra grass grows wild there. Qayloqay was little he got lost there you know.

but? every day at the brink alive somehow. nothing serious..

my but what a lovely moon huh.

that mountain what's behind it.

marshes mountains and ricefields. all the same.

yes that's what i mean.

there's the sea. who was it. yuh. Qanimm.

they were boasting. the sea's a sky turned into a river.

then it must be also somehow blue huh.

even by day they say it's black. big & black alive. 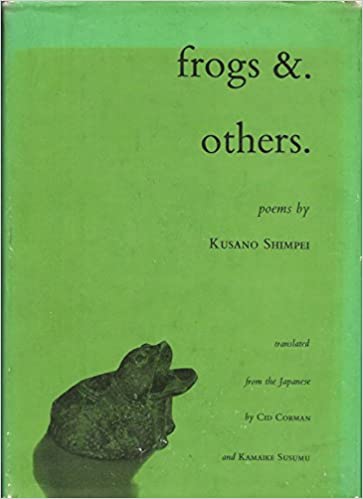 translated from the Japanese by Cid Coman

When I was young, if I came upon a book published by

Mushinsha / Grossman – I had to own it. I bought each and

every one. That's how I came to read Frank Samperi, Cid Corman,

what could go wrong? Nothing did. The books were exquisite, an

extra minute or so was taken to enhance the design of the books,

life changing. You know the little girl you once saw walking on a cloud

in the park with a book under her arm — a Mushinsha book, that was me.

In 1969 when the Shimpei book was published, issued in a hefty

a masterstroke, and was at the  height of his best years when he wasn’t peering

around for fame and notoriety but sharpening his skills as a poet and a mover.

Labels: Bob Arnold, Cid Corman, Japanese Poetry, Kusano Shimpei
Newer Posts Older Posts Home
Subscribe to: Posts (Atom)
A poem (or more) will be offered by the hour or with the day and at the very least once a week. So stay on your webbed toes. The aim is to share good hearty-to-eat poetry. This is a birdhouse size file from the larger Longhouse which has been publishing from backwoods Vermont since 1971 books, hundreds of foldout booklets, postcards, sheafs, CD, landscape art, street readings, web publication, and notes left for the milkman. Established by Bob & Susan Arnold for your pleasure.
The poems, essays, films & photographs on this site are copyrighted and may not be reproduced without the author's go-ahead.
Write Bob or the Bookshop