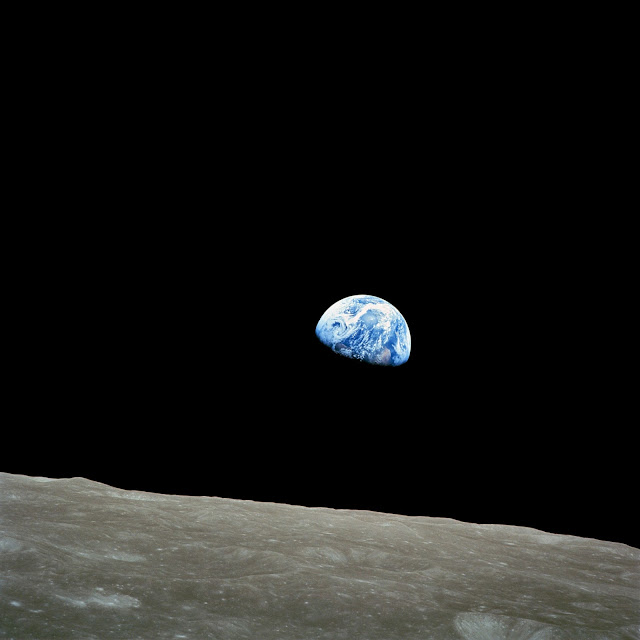 The full moon always has me with rightful energy, perhaps the werewolf in me? So last night,
or early morning, last night at 1:15, I stepped out into the clear white wash of full moonlight.
White grass, white dirt back road, white through all the woods, and feeling terrific in a t-shirt
at 29 degrees. I just had to make sure Kokomo our cat didn't get out with me, he wanted to,
there by the glass door peering out at me having all the fun.

So as I looked up at the moon and its light, long ago astronaut William Anders stood on the moon
and took this photograph of mother earth. . .where we're having all the trouble with Trump and Putin
and taxes and harrowing politics and media and climate change and one squabble after another squabble.

However, Anders photograph, and imagine him having the opportunity to see this! seems to say:
"I don't think so."

NASA Apollo 8, December 24, 1968
___________________________
Earthrise is a photograph of the Earth
and parts of the Moon's surface taken by
astronaut William Anders in 1968,
during the Apollo 8 mission.
Nature photographer Galen Rowell declared it
"the most influential environmental photograph ever taken."

EVERYTHING HERE IS PERFECT ~

Labels: Music Box, Sister Rosetta Tharpe
Newer Posts Older Posts Home
Subscribe to: Posts (Atom)
A poem (or more) will be offered by the hour or with the day and at the very least once a week. So stay on your webbed toes. The aim is to share good hearty-to-eat poetry. This is a birdhouse size file from the larger Longhouse which has been publishing from backwoods Vermont since 1971 books, hundreds of foldout booklets, postcards, sheafs, CD, landscape art, street readings, web publication, and notes left for the milkman. Established by Bob & Susan Arnold for your pleasure.
The poems, essays, films & photographs on this site are copyrighted and may not be reproduced without the author's go-ahead.
Write Bob or the Bookshop