1966, Swedish
Director Ingmar Bergman
Bibi Andersson
Liv Ullmann
35 mm print of the film shot by Sven Nykvist
according to David Thomson best viewed in its correct 1.33:1 aspect ratio
(which it isn't here, but it's free, full film showing, and on Youtube)
In 2014 Persona was recovered and redelivered on DVD by the Criterion Collection
who have achieved the ratio right
According to Thomson, on Youtube, "the original glow
of Nykvist's work is retained"
Thomson goes further, "Bergman and Nykvist, Andersson and Ullmann
made Persona for movie theaters — But was that their mistake, their
fussiness? Without knowing it, were they really anticipating something like Youtube yet to come?"
The intense little boy in spectacles at the start of the film holds a book,
it's Lermontov's A Hero of Our Time
This boy is Jorgen Lindstrom, born in 1951
he made other films as a child
then went to work in a film laboratory
Even with his film background, Thomson
wonders, "I wonder where he is now."
Ingmar Bergman passed away in 2007
The two actresses are still with us
Susan Sontag thought Persona
the greatest film ever made

"It is one of money's deftest tricks to arrange the world so that we don't see it.
So it's an accomplished maneuver of the movies to convey a feeling
of desirable wealth without provoking fury or revolution in that 90
percent who are neither pretty nor rich enough to be up there on the screen.
For decades, it could be claimed that movies were telling us stories, offering
us harmless dreams, bringing delight and consolation —
doing all those things that the director in Sullivan's Travels
comes to see as precious and useful. But in asking
you to watch movies, I have to suggest levels of geological content and
discontent beneath those friendly messages. The screen breathes money,
and it's more than a nickel, or however much you paid the last time you went." 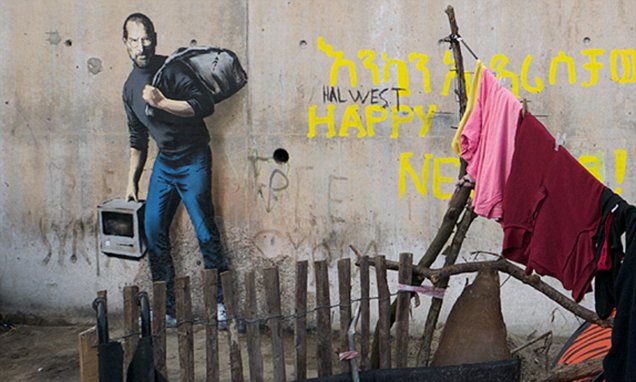 "Banksy said: “We’re often led to believe migration is a drain on the country’s resources but Steve Jobs was the son of a Syrian migrant. Apple is the world’s most profitable company, it pays over $7bn (£4.6bn) a year in taxes – and it only exists because they allowed in a young man from Homs.”

Labels: Apple, Bansky, Immigration, Steve Jobs
Newer Posts Older Posts Home
Subscribe to: Posts (Atom)
A poem (or more) will be offered by the hour or with the day and at the very least once a week. So stay on your webbed toes. The aim is to share good hearty-to-eat poetry. This is a birdhouse size file from the larger Longhouse which has been publishing from backwoods Vermont since 1971 books, hundreds of foldout booklets, postcards, sheafs, CD, landscape art, street readings, web publication, and notes left for the milkman. Established by Bob & Susan Arnold for your pleasure.
The poems, essays, films & photographs on this site are copyrighted and may not be reproduced without the author's go-ahead.
Write Bob or the Bookshop