I continue to be astonished that not enough Americans are sufficiently alarmed and abashed by the dangerous idiocies that continue to usher forth from the mouth of the man who will on Friday be inaugurated as president of the United States.
Toss ideology out of the window. This is about democracy and fascism, war and peace, life and death. I wish that I could write those words with the callous commercialism with which some will no doubt read them, as overheated rhetoric simply designed to stir agitation, provoke controversy and garner clicks. But alas, they are not. These words are the sincere dispatches of an observer, writer and citizen who continues to see worrisome signs of a slide toward the exceedingly unimaginable by a man who is utterly unprepared.
In a series of interviews and testimonies Donald Trump and his cronies have granted in the last several days, they have demonstrated repeatedly how destabilizing, unpredictable and indeed unhinged the incoming administration may be. Their comments underscore the degree to which this administration may not simply alter our democracy beyond recognition, but also potentially push us into armed conflict.
Last week, Trump’s secretary of state nominee, Rex Tillerson, saidduring his confirmation hearing that the United States had to “send China a clear signal that, first, the island-building stops, and second, your access to those islands also is not going to be allowed.”

The only way to do this is with some sort of naval blockade, which China would undoubtedly interpret as an act of war.
Indeed, as Business Insider reported, Chinese state-run media responded in an editorial, “Unless Washington plans to wage a large-scale war in the South China Sea, any other approaches to prevent Chinese access to the islands will be foolish.”
Business Insider quoted Bonnie Glaser, a senior adviser for Asia and the director of the China Power Project at the Center for Strategic and International Studies, who pointed out that Tillerson’s position could easily result in war.
If the United States put “a cordon of ships around one or all of the islands, and the Chinese flew in aircraft to one of their new islands, what are we going to do? Shoot it down?” Glaser asked. “We’d certainly end up in a shooting war with China.”

But even short of the conflict over the islands, The Wall Street Journal’s Andrew Browne suggested Tuesday, Trump’s talk on trade alone could escalate into an armed conflict with China. Trump has said he will make continued adherence to the “one China” policy — which recognizes Beijing as the sole government of China — conditional on negotiations over what he sees as currency manipulation and other unfair trade practices by China.
As Browne points out:
“The gambit has profound security and military implications. Taiwan is a regional flash point. Beijing regards the island as an inalienable part of Chinese territory; ‘One China’ expresses not just its political desire for unification but a core part of Chinese identity. Chinese leaders will fight for it. They can’t lose Taiwan.”
Make no mistake: As bad of an actor as China is, the United States actually depends on China. It is one of our biggest trade partners, but furthermore it is one of the last remaining checks on an erratic North Korea. China could simply stop using its influence to make North Korea behave.
And as you may recall, during the campaign Trump suggested that the way to contain North Korea was for nuclear proliferation in the region. In March, Trump said of nuclear weapons: “You have so many countries already — China, Pakistan, you have so many countries, Russia — you have so many countries right now that have them.” He continued: “Now, wouldn’t you rather, in a certain sense, have Japan have nuclear weapons when North Korea has nuclear weapons?”
Then there is the destabilizing and downright frightening random rhetoric. Trump has suggested that he equally trusts America’s friend-in-arms Angela Merkel and his friend-in-spirit Vladimir Putin.
Trump told The Washington Post this week that he may start having military parades in major American cities à la North Korea: “Being a great president has to do with a lot of things, but one of them is being a great cheerleader for the country.” He continued: “And we’re going to show the people as we build up our military, we’re going to display our military. That military may come marching down Pennsylvania Avenue. That military may be flying over New York City and Washington, D.C., for parades. I mean, we’re going to be showing our military.”
And, Trump continues to trash NATO, calling it “obsolete.”
This is insanity. But too many Americans don’t want to see this threat for what it is. International affairs and the very real threat of escalating militarization and possibly even military conflict seems much harder to grasp than the latest inflammatory tweet.
Maybe people think this possibility is unthinkable. Maybe people are just hoping and praying that cooler heads will prevail. Maybe they think that Trump’s advisers will smarten him up and talk him down.
But where is your precedent for that? When has this man been cautious or considerate? This man with loose lips and tweeting thumbs may very well push us into another war, and not with a country like Afghanistan, but with a nuclear-armed country with something to prove.
Are you not alarmed?
Posted by Bob Arnold / Longhouse at 9:00 AM 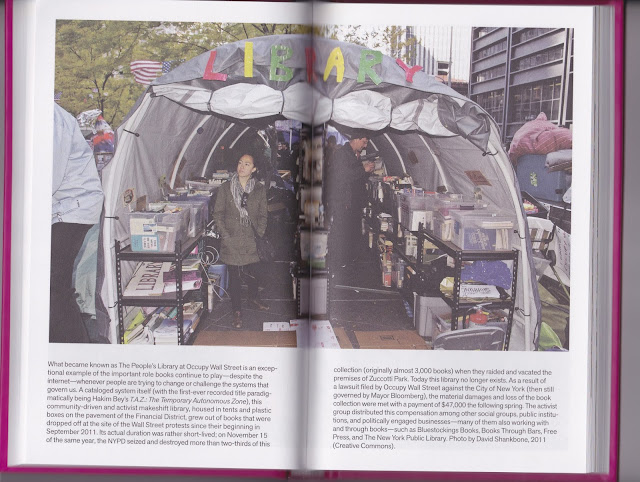 "...on November 15, (2011). . .the New York Police Department
seized and destroyed more than two-thirds of the collection (originally almost 3,000 books) when they raided and vacated the premises of Zuccotti Park. Today this library no longer exists. As a result of
a lawsuit filed by Occupy Wall Street against the City of New York
(then governed by Mayor Bloomberg), the material damages and loss
of the book collection were met with a payment of $47,000 the
following spring. The activist group distributed this compensation
among other social groups, public institutions and politically engaged
businesses. . ."

Labels: Fantasies of the Library, The People's Library at Occupy Wall Street
Newer Posts Older Posts Home
Subscribe to: Posts (Atom)
A poem (or more) will be offered by the hour or with the day and at the very least once a week. So stay on your webbed toes. The aim is to share good hearty-to-eat poetry. This is a birdhouse size file from the larger Longhouse which has been publishing from backwoods Vermont since 1971 books, hundreds of foldout booklets, postcards, sheafs, CD, landscape art, street readings, web publication, and notes left for the milkman. Established by Bob & Susan Arnold for your pleasure.
The poems, essays, films & photographs on this site are copyrighted and may not be reproduced without the author's go-ahead.
Write Bob or the Bookshop