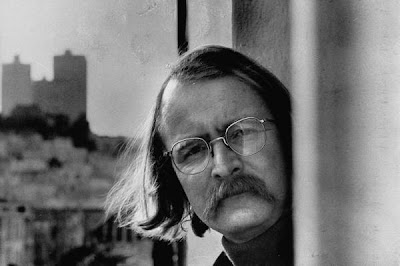 
FOR FEAR YOU WILL BE ALONE


For fear you will be alone
you do so many things
that aren't you at all.


"Good work," he said, and
went out the door. What
work? We never saw him
before. There was no door.


The sexual accident
that turned out to be your wife,
the mother of your children
and the end of your life, is home
cooking dinner for all your friends.


I have been unable to find a poem
for this title. I've spent years
looking for one and now I'm giving
--------up.

MARCH 18, RESTING IN THE MAYTAGHOMAGE


Looking out a hotel window
it's snowing in New York with
great huge snowflakes like millions
of transparent washing machines swirling
through the dirty air of this city, washing
--------it.

WE ARE IN A KITCHEN


We are in a kitchen
in Santa Fe, New Mexico.
Some bacon is frying.
It smells like a character
that you like in a good movie.
A beautiful girl is watching
-------the bacon.


The last surprise is when you come
gradually to realize that nothing
--------surprises you any more.

1 / THE CURVE OF FORGOTTEN THINGS

Richard Brautigan was born in Tacoma Washington on January 30, 1935.
He died of a self inflicted wound some time in the autumn of 1984 in Bolinas California.
The date isn't precise because the body stayed unknown for awhile.
If a 'note' was left it was cryptic but the author wasn't ~
when asked how to pronounce his name he often said,
"Richard Brought A Gun".
Zillions tried to write like him, but none as well. 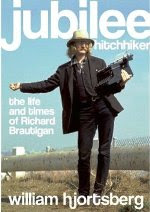 In this monster biography of Brautigan I've reached page 100, with 800 microscopic type size pages to go. He's already killed himself, born himself, raised himself, left home and all behind as if the genuine orphan, and has landed in "Frisco". Now the tale begins. I adored all his books when I came upon them in 1968 and that lasted for about 10 years. Watermelon Sugar was sweet to the tongue in 1970. Let's not forget 1970. Sweetheart saw him read in Santa Barbara at the same time, and since Brautigan didn't drive, we're now thinking K. may have driven him down. At age 76 (in May) K. will still get up and drive at the drop of a hat, or a dare.