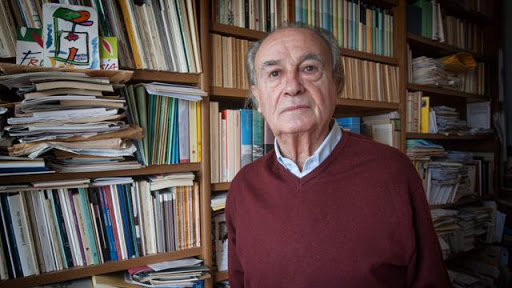 We don't want bosses of any kind,

Stop asking us so many questions.

Look at our injuries

the damage done to peasants

We've gotta yank this plant out of the world

once and for always.

Don't ask anything else of us. We've really

made up our guts.

the same as ever;

because they want the land

because they never stop

day and night under every kind of sky.

translated by Jack Hirschman from the Italian

most of his adult life — in an industrial park of

chemical factories in the Porto Marghera district of Venice.

Well known as a worker-poet he shared his poems for years,

printed in mimeo format, to workers at the factory and in many

schools he visited. Poet & translator Jack Hirschman chose for this

collection from three previous books by Brugnaro: We Must Want To,

The Silence Doesn't Rule and The Clear Stars of These Nights.

Born in Mestre Italy in 1936, Ferruccio Brugnaro has retired from

the factory shift and now devotes his full-time to writing.

Labels: Ferruccio Brugnaro, Italian Poetry, Jack Hirschman
Newer Posts Older Posts Home
Subscribe to: Posts (Atom)
A poem (or more) will be offered by the hour or with the day and at the very least once a week. So stay on your webbed toes. The aim is to share good hearty-to-eat poetry. This is a birdhouse size file from the larger Longhouse which has been publishing from backwoods Vermont since 1971 books, hundreds of foldout booklets, postcards, sheafs, CD, landscape art, street readings, web publication, and notes left for the milkman. Established by Bob & Susan Arnold for your pleasure.
The poems, essays, films & photographs on this site are copyrighted and may not be reproduced without the author's go-ahead.
Write Bob or the Bookshop