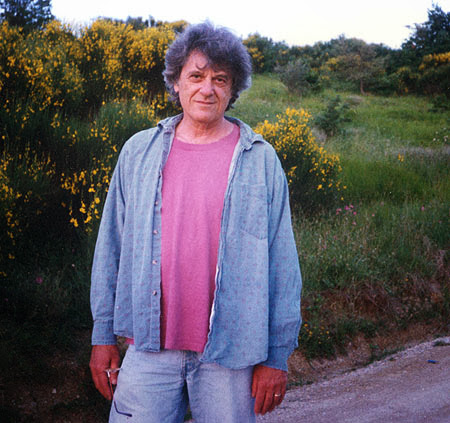 She didn't like me. So I phoned her every day. I announced the new movies, concerts, art exhibits. I talked them up, excitements out there, claiming them in my voice. Not to like me was not to like the world. Then I asked her out. Impossible to say no. I appeared at her door in a witty hat, a crazy tie. Sometimes I changed my hairstyle. I was various, talking, dancing, waving my arms. I was the world. But she didn't like me. If she weren't so sweet, if she had will power, if she didn't miss the other guy so much, she'd have said, "Beat it, you're irrelevant." But she was in pain, confused about herself. The other guy had dumped her. I owed him a debt. It took the form of hatred, although, if not for him, she wouldn't have needed me. Not that she did. She needed my effort, not me. Me, she didn't like. Discouraged, sad, thinking I'd overdone this bad act and maybe I didn't like her all that much, I said, "Let's go to the restaurant next door, have dinner, say goodbye." She seemed reluctant, even frightened. I wondered if, in such decisive gestures, there was hope. She said, "Not there." I wondered if it was his hangout, or a restaurant she used to enjoy with him. I insisted, "Please," she said, "any other restaurant." But I needed this concession. She'd never given me anything else. For two men I'd talked and danced, even in bed. I insisted. Adamant. Shaking. "Only that restaurant." She took my arm. We walked briskly in appreciation of my feelings. As we entered the restaurant, she pulled back. I recognized him — alone, sitting at a table. Him. The other guy. My soul flew into the shape of his face. He yawned. Nothing justifies hate like animal simplicity. "Look. He's yawning. What a swine." Was it a show of casual vulnerability? Contempt? She pulled my arm. I didn't budge. I stared. His eyes squeezed to dashes. I heard the mock whimper of yawns. He began scratching the tablecloth. Two waiters ran to his side with questions of concern. His yawn was half his face. Batlike whimpers issued from it. Jawbones had locked, fiercely, absolutely. He needed help. My fist was ready. She cried, begging, dragging me away. I let her. That night was our beginning. Whenever I yawned at her, she'd laugh and plead, "Stop it." Her admiration of me extended to orgasm. Even beyond. It was not unmixed with fear.

Labels: Leonard Michaels
Newer Posts Older Posts Home
Subscribe to: Posts (Atom)
A poem (or more) will be offered by the hour or with the day and at the very least once a week. So stay on your webbed toes. The aim is to share good hearty-to-eat poetry. This is a birdhouse size file from the larger Longhouse which has been publishing from backwoods Vermont since 1971 books, hundreds of foldout booklets, postcards, sheafs, CD, landscape art, street readings, web publication, and notes left for the milkman. Established by Bob & Susan Arnold for your pleasure.
The poems, essays, films & photographs on this site are copyrighted and may not be reproduced without the author's go-ahead.
Write Bob or the Bookshop