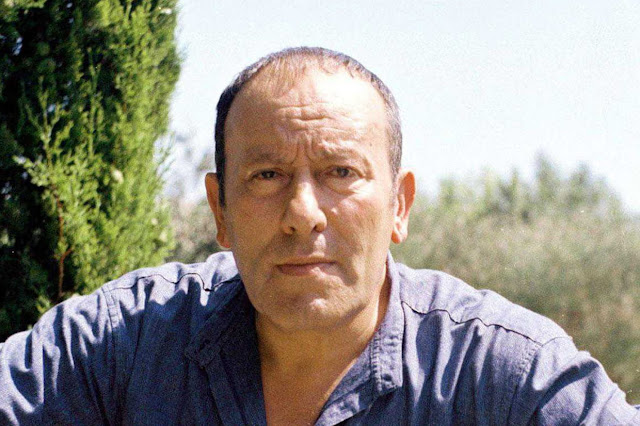 I think of that army of cowards with their appe-

tites for dictatorship that will perhaps be seen

again in power, in this forgetful country, by

those who will survive this time of damned al-

We are being torn apart between the avidity for

knowing and the despair of having known. The

goad will not renounce its sting and we our hope.

Act as primitive and forsee as a strategist.

To judge by the subsoil of the grass where a cou-

life must have been very sweet.

The poem's line of flight. It should be within the

power of each to feel.

Eternity is hardly longer than life.

I think of the woman I love. Her face is suddenly

masked. The void is in its turn sick.

Get intelligence going without the help of ord-

We are like those toads who in the austere night

of the marshes call without seeing each other,

bending to their love cry all the fatality of the

One need not love men to be of real help to them.

Only desire to improve that expression in their

eyes when it lights upon others more impover-

ished than themselves, to prolong by a second any

pleasant moment of their lives. After this move

and each root treated, their breathing would

become calmer. Above all don't deprive them al-

together of these painful paths, after whose effort

follows the evidence of truth through tears and

Horrible day! I was witness, some hundred meters

away, to the execution of B. I had only to press

the trigger of my Bren gun and he could have

been saved! We were on the heights overlooking

and at least equal in number to the SS. They un-

aware that we were there. To the eyes around me

everywhere begging for the signal to open fire I

slipped a polar chill into my bones.

He fell as if he didn't make out his executioners

and so light it seemed to me, that the least breath

of wind could have lifted him from earth.

I didn't give the signal because this village had to

be spared at any price. What is a village? A village

like any other? Did he perhaps know at that ulti-

The time of enraged mountains and fantastic

Accumulate, then distribute. Of the mirror of the

universe be the part that is densest, most useful

Keep with respect to others what you have pro-

mised yourself alone. That is your contract.

The fruit is blind. It's the tree that sees.

The people of the meadows enchant me. Their

frail and venom-free beauty I don't grow tired of

reciting to myself. The vole, the mole, dark

children lost in the chimera of the grass, the slow-

worm, child of glass, the cricket as docile as any,

the grasshopper that clicks and counts its linen,

the butterfly that stimulates intoxication and an-

noys the flowers with is silent hiccups, the ants

sobered by the great green expanse, and immedi-

Grassland, you are the day's encasement.

Since the kiss in the mountains, time is guided on

the golden summer of her hands and the ivy

ing children and seeing through our eyes.

This is the hour when windows escape houses to

catch fire at the end of the world where our

world is going to dawn.

Are we doomed to being only the beginnings of

If life could only be a disappointed sleep. . . .

There are two ages for the poet: the age during

which poetry, in all regards, mistreats him, and

that when she lets herself be madly embraced.

But neither is wholly defined. And the second is

Plunge into the unknown which cuts deep. Com-

pel yourself to whirl about.

There's no more question of the shepherd being

guide. Or so the politician, this new general far-

Formerly at the moment I got into bed, the idea

of a death for the time being in the bosom of

sleep proved pacifying, today I go to sleep to live

All the virtue of the August sky, of our trusted

anguish, in the meteor's golden voice.

"My body was more immense than earth and of

it I knew only a very tiny part. I receive such

innumerable promises of felicity, from the bot-

tom of my soul, that I beg you to keep for us

In the depths of our darkness there is no one place

A war had begun which, though most of his country was
soon occupied, occupied Rene Char still more. . . .He was
about 36 then, and the poetic journal he kept of and at
that time comes to us under the auspices of his Resistance
code-name, HYPNOS, the Greek divinity of Sleep.

I read this now during the Covid pandemic and much of it aloud
to the one I love as we travel around, truck and book in lap, and
what are these tears in my eyes? 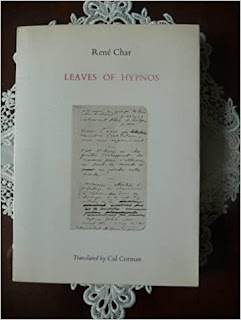 Labels: Cid Corman, French Literature, French Resistance (WW2), Rene Char
Newer Posts Older Posts Home
Subscribe to: Posts (Atom)
A poem (or more) will be offered by the hour or with the day and at the very least once a week. So stay on your webbed toes. The aim is to share good hearty-to-eat poetry. This is a birdhouse size file from the larger Longhouse which has been publishing from backwoods Vermont since 1971 books, hundreds of foldout booklets, postcards, sheafs, CD, landscape art, street readings, web publication, and notes left for the milkman. Established by Bob & Susan Arnold for your pleasure.
The poems, essays, films & photographs on this site are copyrighted and may not be reproduced without the author's go-ahead.
Write Bob or the Bookshop