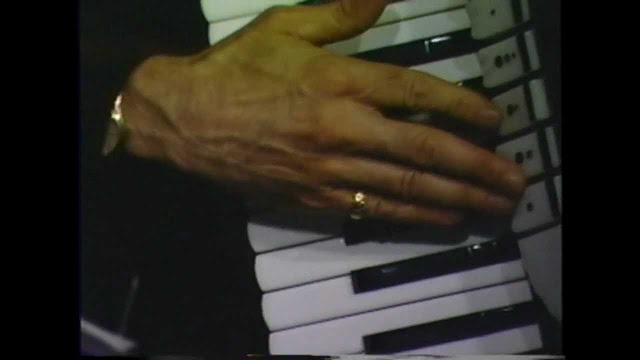 Across the brawn of the river

In a park tree topped by sunshine

We walked and only stopped

Once because we just had to

Listen to a man off by himself

With no hat down or instrument

Case open who sat straight up

On a bench with his both feet

Dancing ‘cause you see beside

This water and flowing up into

The trees and looking back to

The city we all could hear

We used to have a rat that lived in the house

A big old rat who lived under the bathroom floor boards

Being an old house with so many holes the rat had

his own way of coming up through the floor and

onto the bathtub and stealing the soap, he loved the soap

There wasn't much you could do, you had a rat in the house

Until I shot it, because I had to, because we had a baby and

you can't have a rat and a baby, so the rat had to go

shot the rat right in front of him right in broad

I remember the rat, and the rifle, the toilet, but not the friend

Sweetheart had a fat pink warm and cuddly chair

mornings and we still get a little sick to think that

the rat had moved into the chair after it had moved

out from under the bathroom floor boards and still

ate the soap — that means he walked across the kitchen

the toughest wood to split

We wanted to know

Where all the snow was

All winter no snowshoeing

But long hikes and ice-skating

Near spring we drove out

Of the valley up to

The mountains and there a

Lonely road of deep snow was

Labels: Bob Arnold (Heaven Lake), Longhouse Books, Vermont
Newer Posts Older Posts Home
Subscribe to: Posts (Atom)
A poem (or more) will be offered by the hour or with the day and at the very least once a week. So stay on your webbed toes. The aim is to share good hearty-to-eat poetry. This is a birdhouse size file from the larger Longhouse which has been publishing from backwoods Vermont since 1971 books, hundreds of foldout booklets, postcards, sheafs, CD, landscape art, street readings, web publication, and notes left for the milkman. Established by Bob & Susan Arnold for your pleasure.
The poems, essays, films & photographs on this site are copyrighted and may not be reproduced without the author's go-ahead.
Write Bob or the Bookshop