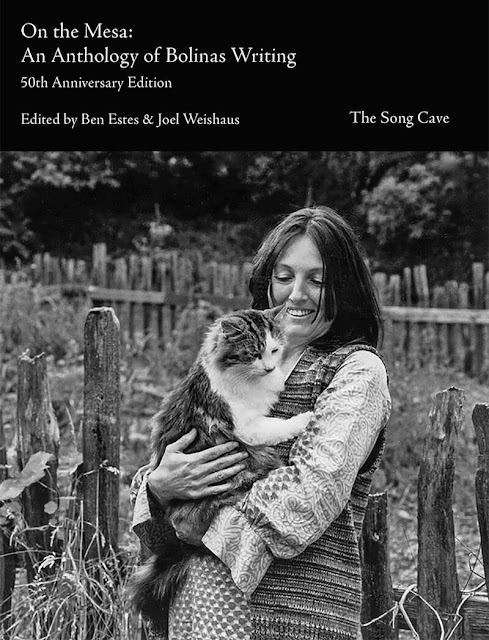 It's a shame, the re-issue of this anthology is almost batting .1000 —

by Gerard Malanga, who not only captures the time element of the late 1960s,

but Malanga has always had an affectionate eye for cats.

This anthology was first published by City Lights in 1971

and this expanded edition draws in an aura of American poetry

and the NewYork School of poets, and for a change digs into

anthology and a sure hand of the California poem.

As they say in that funny world: it's the only reason why I

can't give this book 5 Stars.

A thorough biographical index of each poet would have

also been a treat and finished off a sterling package.

The Song Cave makes terrific books, each title comes off the block

similar but unique, much as New Directions used to make them and

how we used to go hunting for them. Black spine, same square size,

cool and fashionable, neat typeface, and an exciting range

Just not perfect, yet.

Labels: BEN ESTES, BOLINAS POETRY, JOEL WEISHAUS, poetry, The Song Cave
Newer Posts Older Posts Home
Subscribe to: Posts (Atom)
A poem (or more) will be offered by the hour or with the day and at the very least once a week. So stay on your webbed toes. The aim is to share good hearty-to-eat poetry. This is a birdhouse size file from the larger Longhouse which has been publishing from backwoods Vermont since 1971 books, hundreds of foldout booklets, postcards, sheafs, CD, landscape art, street readings, web publication, and notes left for the milkman. Established by Bob & Susan Arnold for your pleasure.
The poems, essays, films & photographs on this site are copyrighted and may not be reproduced without the author's go-ahead.
Write Bob or the Bookshop