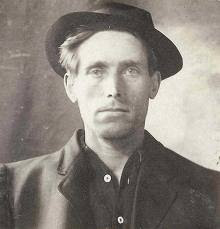 
On January Tenth Nineteen Fourteen Two men fixed some masks of red handkerchiefs Walked into the Temple and South Street Store Laid Morrison and his son dead on the floor. Before he died Merlin Morrison Reached under his counter and pulled his gun The fellows tried to run back out the door again Morrison put a bullet in one of the men. Just three days later you arrested me At the Eselius home on Seventeenth South Street Just because I've got a fresh bullet hole You claim that I killed the Morrisons in their store. I was courting a woman and had a fight with a man He fired a pistol that lodged in me Old Prosecutor Leatherwood can beat out his brains But I'm not going to tell you this lady's name. Take away these attorneys you picked for me My own lawyer now I'm going to be It's because I'm a union organizer in the copper mines You've got me on your killing floor to die. My labor friends sent Judge Hilton and Christensen To prove I did not kill the Morrisons But I cannot drag my lady's honor down I can't tell where I got my gunshot wound. It was in June you convicted me You said I was guilty in the worst degree I don't want your pardon, but an honest trial, If I can't get a fair trial I will die. President Wilson wired the Governor Spry Saying please don't let Joe Hillstrom die Several thousand letters and telegrams Piled up on the governor's desk from workers hands. The governor wired to Wilson, Nothing I can do, The Pardon Board and Supreme Court, too, Both did uphold the frame up trial They all want to see me walk my last long mile. The death watch is set, it's November Eighteenth, My comrades are marching up and down the streets Of all of the cities and the towns around They can sing Joe Hillstrom never let them down. The Nineteenth Day of November is here A frosty old morning with winter in the air Two telegrams that I got to send To Elizabeth Gurley Flynn and Bill Haywood. It's a hundred miles to the Wyoming line Could you arrange to have my body hauled Past that old state line before you bury me at all I just don't want to be found dead here in Utah. Hey, Gurley Flynn, I wrote you a song To the dove of peace. It's coming along. I lived like a rebel, like a rebel I die. Forget me. Organize these copper mines. They march me now out to the baseball park Tie me down in a chair, and the Doctor marks my heart With a little white rag against this black robe Goodbye Joe Hillstrom you done a pretty good job.

Elizabeth Gurley Flynn joined the New York City local 179 of the I. W. W. in 1906 (at age 16) and soon became the foremost woman organizer in the I.W.W.. She subsequently joined the American Communist Party and was serving as an officer until her death in 1964. By Joe Hill's own admission, Elizabeth Gurley Flynn was the inspiration for his song "The Rebel Girl."

Composed new song last week, with music, dedicated to the 'Dove of Peace.' It's coming. And now, good-bye, Gurley dear, I have lived like a rebel and I shall die like a rebel.

Dear Friend Gurley:
I have been saying Goodbye so much now that it is becoming monotonous but I just cannot help to send you a few more lines because you have been more to me than a fellow worker. You have been an inspiration and when I composed the Rebel Girl you was right there and helped me all the time. As you furnished the idea I will now that I am gone give you all the credit for that song, and be sure to locate a few more Rebel Girls like yourself, because they are needed and needed badly.... With a warm handshake across the continent and a last fond Goodbye to all I remain

Yours as Ever
Joe Hill


William D. "Big Bill" Haywood, an organizer for the Western Federation of Miners, chaired the sessions at the founding convention of the I. W. W. (June 27, 1905) and soon became one of the most colorful and forceful labor leaders in American history. As general secretary, Haywood was instrumental in raising money for Hill's appeal for a new trial and in organizing the protest against Hill's execution.

Goodbye Bill: I die like a true rebel. Don't waste any time mourning -- organize!
It is a hundred miles from here to Wyoming. Could you arrange to have my body hauled to the state line to be buried? I don't want to be found dead in Utah.

Goodbye Joe: You will live long in the hearts of the working class. Your songs will be sung wherever the workers toil, urging them to organize.

Joe Hill's body was transported to Chicago and cremated on Nov 26, 1915. His ashes (in accordance with his Last Will) were placed in envelopes and distributed to I. W. W. locals in every U.S. state but Utah, to South America, Europe, Asia, South Africa, New Zealand, and Australia. On May 1, 1916, the ashes were released to the wind.