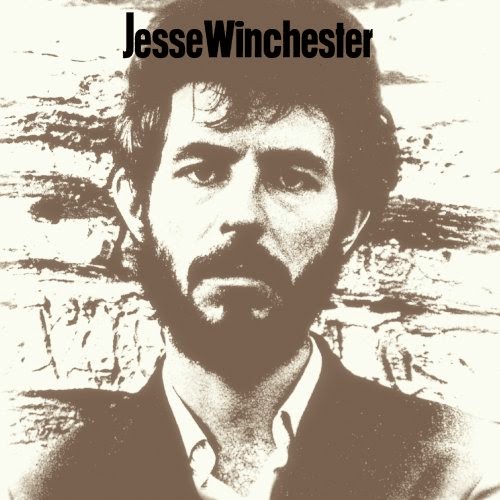 
We woke up before dawn Saturday morning to the news of this great loss to the music world, and the world in general, whether it knows yet or not.

I had just posted a Birdhouse piece to Charis Weston and couldn't ruffle yet its feathers. JW knew all about waiting.

Go find his records — they look so good in full LP mode. Especially his first recording simply titled Jesse Winchester, produced by Robbie Robertson, issued out of Woodstock, New York by Albert Grossman's Bearsville label, Todd Rundgren as recording engineer. Winchester was then on the run, from the draft, the Vietnam War, the law, and the album cover showed forth in full glory, from front to back cover, in the same wilderness era wanted poster style. Not bad for a native southern boy whose father was in the Army Air Corps stationed in Louisiana at the time of Winchester's birth. The draft dodger and recent Williams College graduate settled in Montreal, became a Canadian citizen in 1973, and played his first U.S. concert in a decade after President Jimmy Carter issued an amnesty for draft evaders in 1977.

Which doesn't mean Winchester's career went soaring. Anything but.

More albums had by then been issued, all gems, and most are still found to this day in dollar bins if you can find a record store in your town.

We found Jesse Winchester one night, about fifteen years ago, in a small club in Massachusetts. Same club where we found Townes Van Zandt, Spider John Koerner, David Ray, Ramblin Jack Elliott; yes! it was some club. Side street, squeeze in, the stage the size of a card table, the music all terrific, the audience all swaying in the same clover. We brought our young son Carson to all of these concerts, by then an already devoted music loving cub reporter (Sweetheart was pregnant with Carson for the Townes concert, so yes he was there) and he met Jesse who was kind of snarly and kind of shy. It probably made sense from the territory where he had been. The man would fight two different bouts of cancer, and be taken by the second strike.

I've been playing his music all through the past weekend. Here's a clutch of songs, amongst an easy two dozen, I always liked.

Labels: Jesse Winchester, Music Box
Newer Posts Older Posts Home
Subscribe to: Posts (Atom)
A poem (or more) will be offered by the hour or with the day and at the very least once a week. So stay on your webbed toes. The aim is to share good hearty-to-eat poetry. This is a birdhouse size file from the larger Longhouse which has been publishing from backwoods Vermont since 1971 books, hundreds of foldout booklets, postcards, sheafs, CD, landscape art, street readings, web publication, and notes left for the milkman. Established by Bob & Susan Arnold for your pleasure.
The poems, essays, films & photographs on this site are copyrighted and may not be reproduced without the author's go-ahead.
Write Bob or the Bookshop