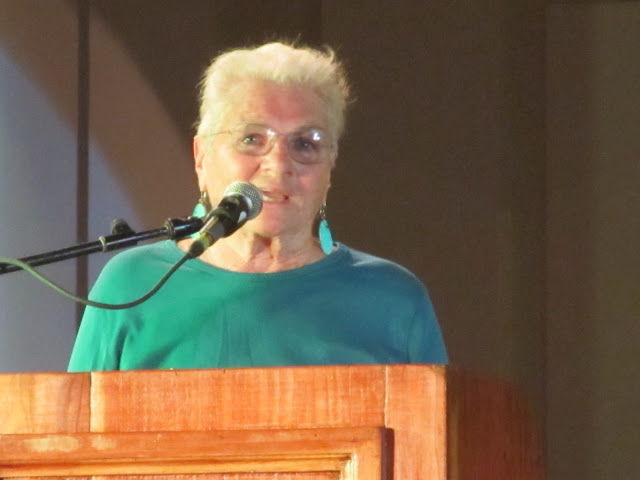 "This is an urgent call. Those who haven't seen the PBS Frontline special "The Choice-2016" should watch it. I realize many of us are sicker than usual of the campaign spectacle this time around. It makes us ill. We think we cannot watch or listen to another sound bite, even from the candidate of our choice. But I urge you to watch this Frontline video for several reasons. First, it is brilliant. Second, it traces Donald Trump and Hillary Clinton from their childhoods so that we come away with an in-depth sense of who they are and how they became who they are. Third--and perhaps most importantly--watching this special we learn that Trump is far more dangerous than anything we may previously have understood. Trump is not simply a self-serving lying megalomaniac racist, sexist and xenophobe. He is a eugenicist. This means that he believes there are some human beings who are genetically superior to others. This was Hitler's philosophy. I sympathize with those in this country who favor a third political party. Who wouldn't like to see our two-party system open to include other truly competitive possibilities. But preventing a Trump presidency is too important right now to be supporting Jill Stein, whose ideology we may appreciate, or Gary Johnson, who doesn't recognize the word Aleppo and cannot name a single foreign leader he admires. The race is too close. The stakes are too high. Watch "The Choice-2016" and then do everything in your power to elect Hillary Clinton, no matter what disagreements you may have with some of her policies. If she doesn't win, it will be too late to bemoan a government in the hands of Mike Pence (whose hero is Dick Cheney), a Supreme Court capable of pushing back every gain we have made in the past many decades, despair among righteously desperate working people who believed they could trust a strongman to fix their lives, and "law and order" rather than the healing of our communities."
_______________________________

Labels: 2016 Presidential Election, Frontline: The Choice 2016, Margaret Randall
Newer Posts Older Posts Home
Subscribe to: Posts (Atom)
A poem (or more) will be offered by the hour or with the day and at the very least once a week. So stay on your webbed toes. The aim is to share good hearty-to-eat poetry. This is a birdhouse size file from the larger Longhouse which has been publishing from backwoods Vermont since 1971 books, hundreds of foldout booklets, postcards, sheafs, CD, landscape art, street readings, web publication, and notes left for the milkman. Established by Bob & Susan Arnold for your pleasure.
The poems, essays, films & photographs on this site are copyrighted and may not be reproduced without the author's go-ahead.
Write Bob or the Bookshop