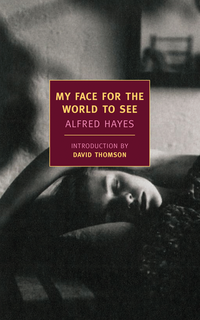 
If you like film noir, and noir novels, this may be one you missed. An absolutely ideal book to read in one-sitting under your favorite summer shade tree.


Alfred Hayes (1911–1985) was born into a Jewish family in Whitechapel, London, though his father, a barber, trained violinist, and sometime bookie, moved the family to New York when Hayes was three. After attending City College, Hayes worked as a reporter for the New York American and Daily Mirror and began to publish poetry, including “Joe Hill,” about the legendary labor organizer, which was later set to music by the composer Earl Robinson and recorded by Joan Baez. During World War II Hayes was assigned to a special services unit in Italy; after the war he stayed on in Rome, where he contributed to the story development and scripts of several classic Italian neorealist films, including Roberto Rossellini’s Paisà (1946) and Vittorio De Sica’s Bicycle Thieves (1948), and gathered material for two popular novels, All Thy Conquests (1946) and The Girl on the Via Flaminia(1949), the latter the basis for the 1953 film Act of Love, starring Kirk Douglas. In the late 1940s Hayes went to work in Hollywood, writing screenplays for Clash by Night, A Hatful of Rain, The Left Hand of God, Joy in the Morning, and Fritz Lang’s Human Desire, as well as scripts for television. Hayes was the author of seven novels, a collection of stories, and three volumes of poetry. In addition to My Face for the World to See, NYRB Classics publishes In Love.

"The most vivid picture of Hollywood since Nathaniel West's
Day of the Locust."
Nelson Algren

Labels: Alfred Hayes, My Face for the World to See, New York Review of Books
Newer Posts Older Posts Home
Subscribe to: Posts (Atom)
A poem (or more) will be offered by the hour or with the day and at the very least once a week. So stay on your webbed toes. The aim is to share good hearty-to-eat poetry. This is a birdhouse size file from the larger Longhouse which has been publishing from backwoods Vermont since 1971 books, hundreds of foldout booklets, postcards, sheafs, CD, landscape art, street readings, web publication, and notes left for the milkman. Established by Bob & Susan Arnold for your pleasure.
The poems, essays, films & photographs on this site are copyrighted and may not be reproduced without the author's go-ahead.
Write Bob or the Bookshop