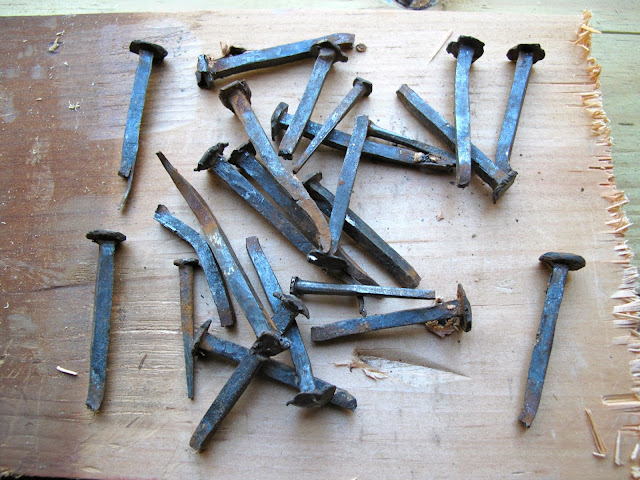 The sun room is going to take awhile to complete. It has too many persuasions. As if I'm attempting to build everything I know into one small structure: heavy glass work, eyebrow windows hand built, all the exterior stone walls, jacking timbers into place, rough beam work, sawmill visits, painting before too cold, masonry work before too cold, a ton of Mexican tile work and adhesive before it is too cold, switching 100 pound doors around because new doors, insulated glass, are way too costly now, way too. Slate work, stone cutting, stone drilling. Rebuilding old doors to be new doors, finish carpentry inside, new floor, build a large trap door into this new floor because the whole ball of wax is over our cellar bulkhead which was built into the original porch deck which is now the subfloor for the sun room. Talk about multitasking! Ah, shut up, and get back to work! Extremely extensive and heavy stonework I did into this bulkhead 30 years ago is now underneath all this new stuff. Never hide old stuff with new stuff — blend it together, work it as harmony, let it all show and be its function(s).

There is a very old door, just look at the cut nails (above) sunk into its pine boards, that used to be gerry-rigged in this 223 year old house as an entry way down into the cellar from inside the house. In the same vicinity, once, as the stairway that went from the front door up into the second story. All removed over decades, rebuilt, reformed, renewed. I even built in a new short stairway like one finds in a ship and I swear when I duck up into this little secret passageway stairway I feel I'm at sea and on a ship, which is my secret way of being on-a-ship.  Have secrets. Share them.

Anyway, I took off this door and stored it away in the rafters of the big woodshed for many more years knowing I'd have a use for it one day. It hasn't happened and the door is becoming in-the-way. So yesterday, I did a 'heaven's forbid' in the eyes of the purists, which I know for a fact the old timers have done forever (how do you think they got that gloss and bulk and antiquity to work?) by tearing down the old door, saving every damn hard-to-pull cut nail, and the elegant wood cleats built into the door, and took the one inch thick boards I needed instead of measly 3/4 inch lumber stock, and hand built all day framing for these eyebrow windows. I found the glass for the windows at a FREE display awhile back in Chester, Vermont, just leaning against a tree waiting for the likes of me; and Sweetheart took that into the local hardware store, along with a bunch of other loose sized glass panes I bought over the years for other jobs here, there and everywhere from this hardware store and didn't use for lopsided reasons, and a very generous young clerk took all that glass and cut it down to eyebrow window size for us. This is exactly how the world moves along and works well with the complexities of one another: you help me who has helped you and buildings go up (instead of down).

Bob Arnold is expanding his original builder's notebook On Stone, published from Origin Press in 1988, into a new edition, with new title, and all the old work-site photographs, along with dozens of new ones, plus more chapters and an updating to the building practice. Longhouse will publish later this year the revised book for a 25th anniversary edition.

thick and now rock hard
softwood plank walls
just look at the air-space!
corn cobs, between these planks
and the lathed plastered walls on the
interior, would be the best
bet for insulation