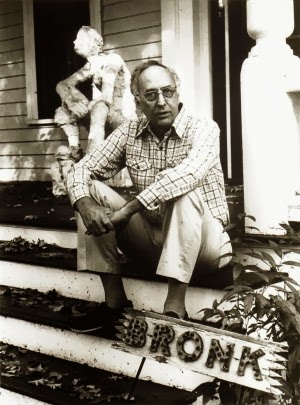 More correspondence (all Bronk) that has come my way on a typical circuitous route from some place in the US to someplace overseas and bounced back to Vermont. I don't mind, it gets here. The letters are one more essential back-feeder into the workings of William Bronk, a poet crucially still unknown to many readers.

As I wrote to my Cid Corman drug supplier (remember to chuckle people, laughter is good for you):

Here, to my mind, via Bronk (who did write me a very brief letter once upon a time relating to Cid) is his core thinking at least on his poetry (1961): " I am after "the weight, the texture, the strength," not of words but of statements, something initially more static than you are, the shape of the rocks as they lie against each other not the sound they make as they tumble over together. What was breath in your metaphor becomes rocks in mine to your great disadvantage but this is my letter and I'll make the metaphors." I think of two poets — you and Joe Massey, who may, just may, over time be thought of two poets after Cid and Bronk who distilled both their mannerisms from their poetry into your own. A fine blend. . .

. . .Of course since early 1974 I went through with Cid his dismissal by Bronk. I can well understand why both men did what they did since they essentially acted on their own personalities, and these were largely different, but complimentary with intent. It's curious what we become. Bronk was a Dartmouth man (we took you to the town, remember the rocking chairs on the porch?) and Cid was anything but. Bronk was small town a wee bit west of New England but still very much of old New England stock. Once upon a time Susan and I went to Bronk's town, he was still alive, and walked down his street, found his large Victorian home, attractive front yard, wide berth porch, winding to disappear behind the house driveway, and looked around at the surroundings. In these letters when he gets up off the porch to take a walk, I know, somewhat, where he was walking. There was one used bookstore in town, a pretty good one, Bronk sold books from his personal library to the store and I found some of these and bought what I could find, they also interested me. In the back of the store was tucked away a magic shop. It was ideal for our purposes because it kept Carson enthralled for hours. Like my father, Bronk was involved in lumber and coal, which he mentions very little in his letters or writing. Cid was the champion of inclusion and thinking he knew best about people and for people (and he was often right), but when he was wrong (as he mishandled some of Bronk, certainly not all) he hit his thumb with his own hammer. Bronk admits that without Cid his poetry may never have been seen. Cid brought it by his persistence and desire to the eyes of Jim Weil and James Laughlin and other publishers watching the pulse of Origin. 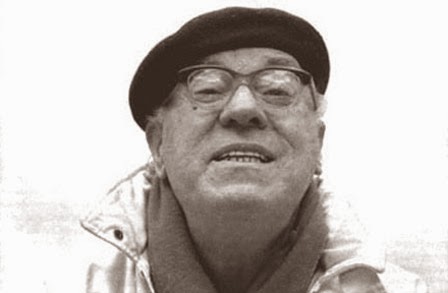 
Cid Corman passed away ten years ago, yesterday, March 12.
Instead of recognizing the day, I thought to pay attention to the next day, and the next.

To come out
after a
long day's work

into snow —
the latest
version of

nothingness
and all so
light
and crisp —

as if we're
the candles
on the cake.

Labels: Cid Corman, Penn Sound, William Bronk
Newer Posts Older Posts Home
Subscribe to: Posts (Atom)
A poem (or more) will be offered by the hour or with the day and at the very least once a week. So stay on your webbed toes. The aim is to share good hearty-to-eat poetry. This is a birdhouse size file from the larger Longhouse which has been publishing from backwoods Vermont since 1971 books, hundreds of foldout booklets, postcards, sheafs, CD, landscape art, street readings, web publication, and notes left for the milkman. Established by Bob & Susan Arnold for your pleasure.
The poems, essays, films & photographs on this site are copyrighted and may not be reproduced without the author's go-ahead.
Write Bob or the Bookshop